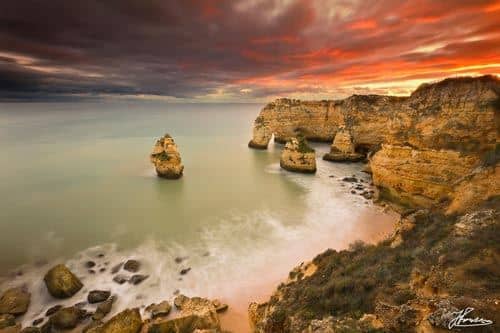 Lagoa’s stunning Praia da Marinha beach has been named one of the world’s “20 Most Stunning Cliffside Beaches” by American news giant CNN.
It was the only Portuguese beach to feature on CNN’s list, which includes other breathtaking beaches from all over such as Navagio Beach in Zakynthos, Greece, and Tropea Beach in Italy.
“Near Lagoa on southern Portugal’s Algarve coast, Praia da Marinha features imposing rock formations and calm waters,” CNN writes about the beach, pointing out that there’s “parking above and a staircase down to the beach, unlike other cliffside beaches where you often “need to hike, climb or boat in”.
As CNN reporter Marnie Hunter highlighted: “Sandy stretches that meander slowly and serenely into gentle waves are lovely. But that’s not the kind of beach that makes your knees buckle and has you reaching for your camera before you’ve got the sunscreen on your nose.”
It is not the first time that Praia da Marinha receives international praise. In 2007, the beach was considered by the Michelin Guide as one of the 10 most beautiful beaches in Europe and as one of the 100 most beautiful beaches in the world.
Photo: JORGE FONSECA
Caption: A prize-winning photo of Praia da Marinha by Algarve photographer Jorge Fonseca, who is currently exhibiting in the square in Carvoeiro until the end of August (www.fonsecaphotography.pt.vu)