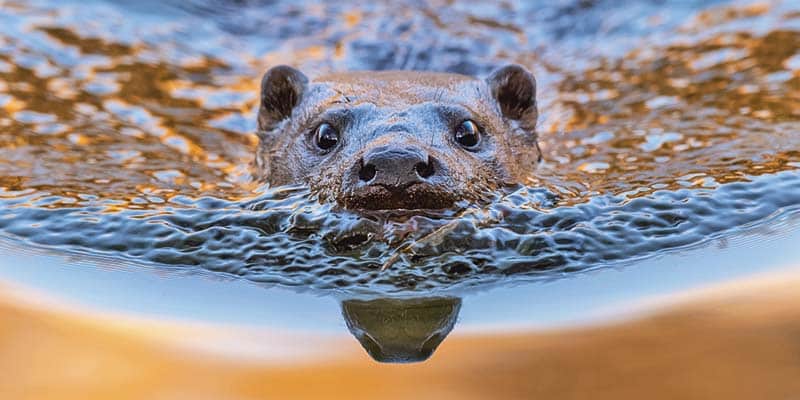 The Eurasian otter is often overlooked as a species in the Algarve due to their shy nature and of course their mainly nocturnal habits. They are surprisingly quite common dwellers along the banks of rivers, including seasonal ones.

I have lived along the River Odelouca, north of the Barragem de Odelouca, for almost three years and although otter sightings are infrequent, evidence of their presence is plentiful.

Although they prefer the cover of darkness to play and feed, they can be spotted during the daytime in peaceful locations, particularly during the winter months.

Spraint is the best evidence to prove their presence, and usually has a sweet aroma. They leave spraint at strategic and prominent features such as raised rocks.

These deposits are used to communicate to other otters and mark their territory and feeding points. Fish bones and crayfish shells should be clearly visible in the spraint.

Another indication is otter footprints, but of course here in the Algarve wet mud isn’t too common so are difficult to spot. The feet have five toes with claw marks and a clear webbing to the footprint.

The holt, the name for an otter home, is usually in the river bank but can also be a short distance away from the river. The holts normally have multiple entrances at different levels in case of flooding and some even have an entrance under water level. Otters grow up to 1.3 metres in length and can weigh up to 9kg. They have two layers of fur, the inner layer to keep warm and the thick outer layer is waterproof.

Breeding is normally springtime but can occur throughout the year. Believe it or not, the young are not natural swimmers and are literally thrown into the water by the parents to learn.

Now, on to my “close encounter” … Firstly, I would like to say that it’s not a good idea to get too close to otters; they may look cute but have powerful jaws and getting bitten by one defending itself is really going to spoil your day.

A friend sent me a message stating he had spotted an otter a few kilometres downstream from my house just after sunrise, so the following day I was at the location before sunrise hidden under camouflage.

Just 30 seconds after concealing myself, I heard splashes. Three otters were swimming along the opposite river bank. I waited a few minutes and watched them swimming about and then decided to press the camera’s shutter button wondering what their reaction to the noise would be. Immediately, all three lifted their heads and looked towards my location. One of them swam directly towards me which meant I captured a fantastic photograph of it up close. It swam in front of me, lifted its head, sniffed the air and then re-joined the other two and continued playing around in the water.

I enjoyed this moment amongst them for another five minutes before they left the river and so did I with a huge smile on my face.

Craig Rogers is a Wildlife and Nature photographer from Wales now living in the Algarve offering Photography Workshops. More information, photographs and blog can be found on his website at www.craigrogers.photography