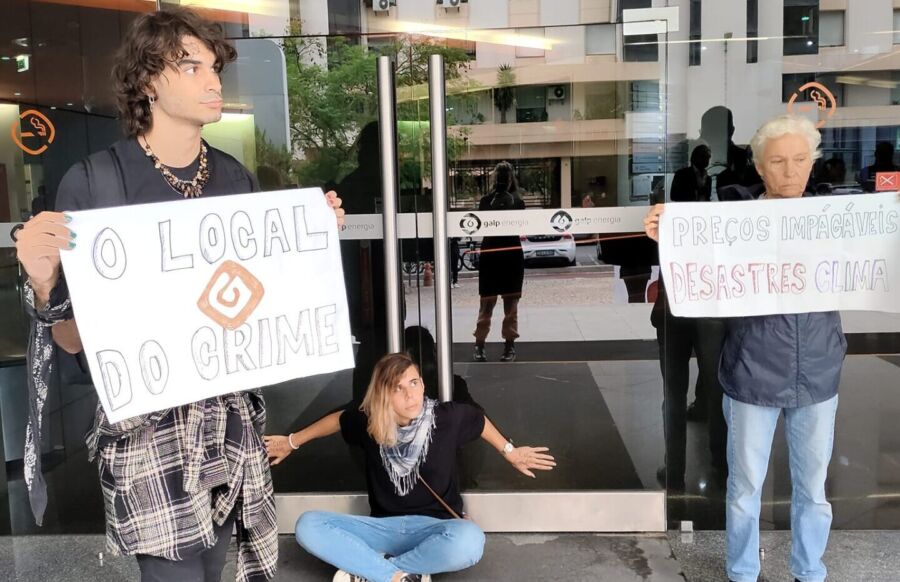 Glue themselves to building’s glass doors

Taking a leaf out of the activists’ manual of Extinction Rebellion in UK, a group of climate activists in Lisbon today have glued themselves to the glass doors of GALP’s headquarters.

Says Lusa, the protest was designed to highlight “the role of oil companies in the cost of living crisis, and the climate crisis”.

It did not attract a ‘large crowd’ (either of onlookers or participants) but the movement is led by climate activist João Camargo who has regularly written for national newspapers, like Público, and is adept at raising publicity.

He told Lusa by phone that this morning’s blockade started at 8.15. “The main entrance was blocked by more than 20 activists, with several stuck to the company’s doors. Police arrived around 10am”.

In Camargo’s mindset, the action was aimed at “interrupting the regular and criminal activity inside this company”.

“We want with this action to make unequivocal the reality that companies like GALP and their multimillion profits are responsible for the rising cost of living in Portugal and for the climate chaos. (…) Companies like Galp have to be stopped,” he said.

According to Climáximo, GALP’s “record profits of €420 million in the first semester are directly related to the increase in prices and inflation”.

For the activists, the “rise in the cost of living of the people in countries all over the world is a consequence of a capitalist economy built to be addicted to fossil fuels”.

According to Climáximo, “in the middle of this energy and social crisis, on top of the climate crisis, the European governments are giving in to the blackmail of the oil companies, and instead of speeding up to put an end to fossil fuels, they continue subsidising this energy and building more infrastructures”.

João Camargo told Lusa that the activists have no interest in talking with GALP officials.

“We have to be honest. We have nothing to talk to GALP. We don’t want any interlocution with companies that compromise the present and the future,” he concluded.