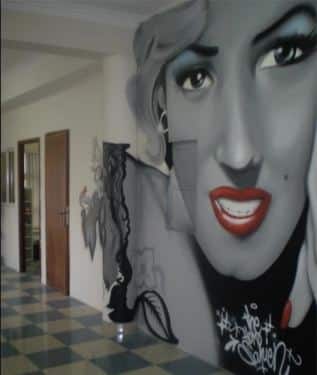 Without doubt the most entertaining game of this season’s league programme saw third place SC Braga snatch a draw against lowly Olhanense at the AXA Stadium last Sunday.

Fresh from their tremendous 2-0 win at Galatasaray (Turkey) in the UEFA Champions League, the home fans turned up en-masse to cheer on their heroes, but in the end were relieved to snatch a draw.

The thrilling encounter swung from end-to-end and if you blinked you were likely to miss one of the eight goals. The visitors, who were trying to stem a run of three consecutive defeats, took the lead with their first attack.

After just four minutes, Babanço, returning after suspension, got behind the Braga defence and his pinpoint centre evaded Vinicius and was turned home by Abdi. Five minutes later and ‘Os Arsenalistas’ were level when Ruben Micael was given too much space on the left. His centre eluded Elderson but fell to Hélder Barbosa who gave keeper Bracali no chance with a searing drive.

Whilst Braga had the majority of the possession, it was Olhanense who counterattacked with impudence and on 25 minutes they regained the lead.

Ivanildo surged through the centre of the Braga midfield and let fly from fully 30 metres. The ball took a slight deflection off Douglão which was enough to beat former Porto keeper Beto.

Ten minutes later and the Algarveans took an unbelievable 3-1 lead. Another teasing cross by Babanço enabled Ivanildo to get in front of Douglão and smash the ball into the roof of the net.

Three opportunities; three goals. Three minutes into the second period and Braga were back in the game.

Mauricio, who was having a poor game at the heart of the Olhanense defence, failed to intercept a free-kick by Hugo Viana. Douglão, making amends for his earlier mistakes, nipped in to head past Bracali. But it was not long before the visitors restored their two goal advantage.

Babanço again made a surge down the left and crossed to Abdi. His goal bound shot was blocked by Beto but fortunately for Olhanense rebounded off Braga defender Ruben Amorim and into the back of the net.

Five minutes later and it could have been five when Mauricio’s powerful header rebounded off the woodwork. This proved to be the turning point in the game and with half-an-hour remaining, Braga began to bombard the Olhanense goal but sterling defensive play from Nuno Reis, Vasco Fernandes and Nuno Piloto kept them at bay until the 81st minute.

Braga were awarded a dubious free-kick out on the right. Mossoró’s cross saw Éder drift inside Mauricio to reduce the arrears to 3-4. Deep into stoppage time, former Olhanense player Ismaily whipped over a low cross that was deflected by Nuno Reis into the path of Douglão, who netted his second of the game to earn the home side a point in what had been a wonderful advert for Portugal’s top flight football league.

A Norwegian TV crew has been in Olhão following Olhanense’s bright young star Liban Abdi. He was born in Somalia in 1988 but spent most of his childhood in Oslo, where he attended both primary and secondary school. Abdi was the first Somali to be awarded a professional football contract at Sheffield United after impressing with the club’s Academy. He holds a Norwegian passport and with three goals in five games he could soon be called-up by Norway’s head coach Egil Olsen.

The Olhanense v 1° de Dezembro game in the 3rd round of the Portugal Cup will take place on Saturday October 20, kick-off 4pm at the Algarve Stadium. Socio-members should purchase their tickets (€3) from the Olhanense Stadium prior to the game. Non-members (€8) can buy their tickets from the club offices or at the Algarve Stadium on the day of the game.

According to the newspaper A BOLA, the future of Sérgio Conceição (pictured) could be in Greece with top side AEK. Conceição had a very public falling-out with Olhanense President Isidoro Sousa at the start of the season. Apparently, the Greek club are willing to do anything to secure the services of the bright, even if volatile, young coach.