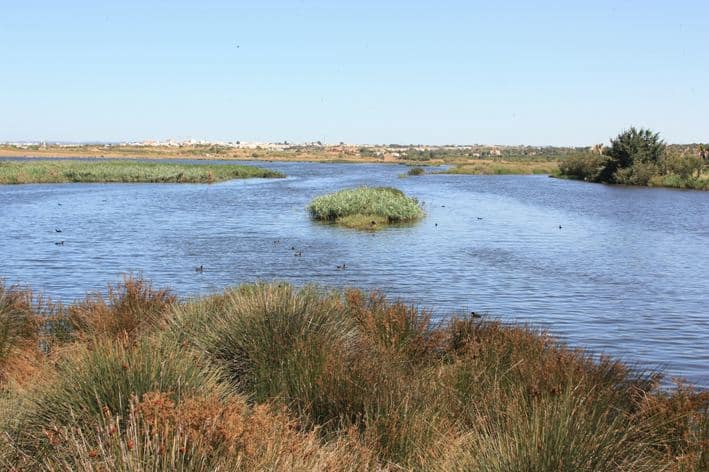 Mid-March … spring migrating birds are on the move while resident and summer species are gearing up for another breeding season in the Algarve’s Lagoa dos Salgados. Something else is in the air now too: fresh hope that greater care will soon be given to this coastal lagoon.

Lagoa dos Salgados, an ecological gem in Praia Grande (Armação de Pêra), has been suffering abuse for many years – and it still is today. Human disturbance to wildlife and farm animal damage to habitat go unchecked.

Fishermen with night-vision equipment are still outwitting the environmental police and illegally trapping eels, fish and shrimps. Diving birds, terrapins and water voles also die in these traps. Stray dogs fed by parked campervan owners go on the rampage by the lakeside and kill what they can.

The abuse is obvious but the relevant authorities seem unable or unwilling to take action. Does the general public really care?

An innovative project is about to be launched based on the conviction that nature conservation is an obligation for all. The initiative will involve various sectors of society, from public authorities and private companies to community groups and individual volunteers.

Cidadania para o Ambiente is being organised by SPEA, the Portuguese ornithological society, with funding from the Toyota Motor Corporation of Japan.

It is one of two such projects in Portugal to be backed by Toyota, the other being in a wetland area near Aveiro in the north. Both have internationally agreed Important Area for Birds and Biodiversity (IBA) status.

The Salgados project will be unveiled at a day-long workshop session in Albufeira on Friday, March 18 in the municipal library, starting at 10am. All interested parties will be welcome.

The current situation and special needs at the lagoon will be discussed during the meeting and this will form the basis for defining what activities should be undertaken and by whom.

SPEA’s Executive Director Luís Costa will be pressing for unified action. “The aim is to develop alternative models of management based on the participation of civil society and relevant stakeholders at local level: communities, municipalities, NGOs, farmers, scouts, etc,” he says.

The Lagoa dos Salgados and surrounding area is home, seasonally or all-year-round, to a remarkable range of waders, waterfowl and other aquatic birds, as well as raptors and passerines, some rare or endangered.

The lagoon is playing an important economic role in eco-tourism in the Algarve, though, of course, it is impossible to place a value on such sightings as a flock of 200 Greater Flamingos, Black-winged Stilts busily feeding at close range, or much more secretive Little Bitterns and Purple Gallinules skulking in the reedbeds.

All forms of wildlife are currently benefiting from a bespoke system put in place to control the level and quality of water in the lagoon. This, however, is not enough to fully take care of an ecosystem that environmental groups have been fighting to safeguard for well over a decade.

The major tourist resort planned for a great swathe of land adjacent to the lagoon is a distinct issue and not directly related to the “citizens for the environment” project.

There are no indications that construction is likely to start any time soon and anyway a court decision is awaited on its future, but the development remains a threat.

Luís Costa is optimistic. “A good management scheme involving citizenship and volunteers will hopefully increase the arguments against a development that could cause the degradation of the site.”

Len Port is a journalist and author based in the Algarve. Follow Len’s reflections on current affairs in Portugal on his blog:
algarvenewswatch.blogspot.pt