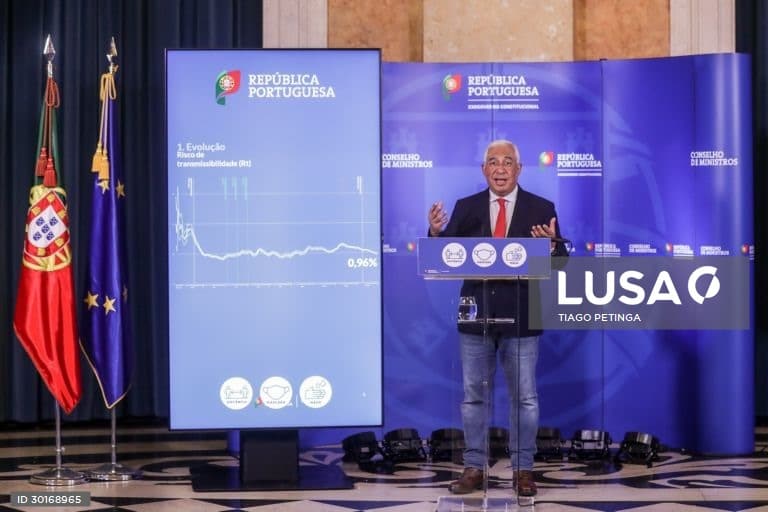 Prime minister António Costa addressed the nation at 3pm today, outlining all the measures that should be in force over Christmas and the New Year – with one major proviso. There will be a new meeting on December 18 to ‘re-evaluate the situation’. If the ‘epidemiological’ picture has taken a turn for the worse, the ‘relaxation’ designed to give families the semblance of a normal festive season may have to be tightened.

But for the time being – with ‘the evolution of the pandemic’ nationally showing significant positive signs – these are the measures:

Until December 23, everything stays ‘the same’ – meaning restrictions in the boroughs deemed ‘extremely high risk’ and ‘very high risk’ continue (ie ‘weekend lockdowns/ restaurants unable to function as normal, etc.) as do the national nighttime curfews.

On the night of Christmas Eve, the nighttime curfews will extend to 2am (giving people time to go to Mass, etc.)

On the night of Christmas Day, nighttime curfew will also extend to 2am.

On the night of December 26 (Boxing Day), the nighttime curfew will go back to 11pm.

For restaurants across the country, the nights of Christmas Eve and Christmas Day can see them all operating until 1am. On Boxing Day, all restaurants are allowed to serve lunches until 3.30pm.

The plan is then for the country to return to the various measures running under the State of Emergency until New Year’s Eve.

On New Year’s Eve every borough in the country will be back in ‘borough lockdown’ – meaning residents cannot move outside their ‘home borough’.

The lockdown will last until 5am on Monday January 4.

The night of New Year’s Eve will allow for people to be out of their homes until 2am – although groups in the open/ streets have to be limited to six people.

There will be no public ‘parties’ or public celebrations of any kind.

But beyond these concessions, the country will have to continue adhering to all measures in place until the current State of Emergency comes to a close on January 7.

All this being said, the PM’s message began with hope: the epidemiological situation is improving. Measures brought in under the State of Emergency ‘tie in’ with the overall improvement, he stressed – thus the reason why the government feels they must be kept in place to continue the improvement.

Numbers of people being treated for Covid-19 in hospitals are dropping – but Mr Costa said they are still ‘extremely high’ while the number of deaths is “very high”.

The good news however is that 27 boroughs have dropped from ‘very high’ in terms of risk of transmission to ‘moderate’.

Portugal’s ‘Rt’ number (denoting rate of transmission) is also down to below 1 now (0.96) – a major step in controlling the evolution of the pandemic.

The PM’s announcement hit an uncomfortable moment where two images came up on the screen behind him showing a family round a Christmas table, under the headline: ‘A Christmas with Care’.

One image was in colour, the other with green light showing the breath emitted by the various people round the table.

At this point the PM talked about the danger of droplets ‘hanging in the air’ and the risk generally of being around a table with family members (or indeed anyone else) if one of the people involved was ‘infected’.

His appeal continued that people, even with the relaxation of measures, should ‘avoid mixing with a lot of other people’, ‘avoid long periods without wearing a mask’ and ‘avoid closed spaces that don’t have good air circulation’.

There was no image (happily) of a family round a table wearing masks (which the initial images seemed to threaten might be coming).

Christmas is about sharing, concluded the prime minister, but we have to ensure that we do not share the virus…

As such there is no limit to the number of people who can gather round the ‘Christmas table’: the government is simply trusting citizens to ‘decide for themselves what is safe’.

In one way, the prime minister’s choice of attire for his announcement mirrored the government’s rather lop-sided approach: he was wearing a shirt, tie and blazer which looked like a suit when in close up – but it wasn’t a suit. He was wearing jeans.

Resident expats have consistently wondered why journalists listening to these briefings never ask why the measures in place apply only to residents. Tourists – admittedly only the very few who are here – are not bound by any of the restrictions. Indeed they are being told by police and other authorities that they can do whatever they like in terms of moving around. They are not checked on arrival in Portugal, nor are they required to provide negative Covid tests.

Said one reader in an email today: “We’ve just had enough now. The government must either get completely tough with everybody, and lock the entire country down, with CLOSED borders for a full 3 weeks, or they must end this nonsense. What on earth do they think they’re achieving with this half-assed job? I thought they had more common sense than this”.

Meantime, the virus ‘headlines’ continue – seemingly always concentrating on the worst aspects: 73 deaths (when every day in Portugal a average of 250-300 people die) and the number of new cases ‘flagged’ (6,087) with PCR tests that are known to be fallible.

The positive points of Portugal’s numbers today are that there are 66 less people in hospital than were on Friday, and the number of recoveries (6,165) has exceeded the number of new cases.