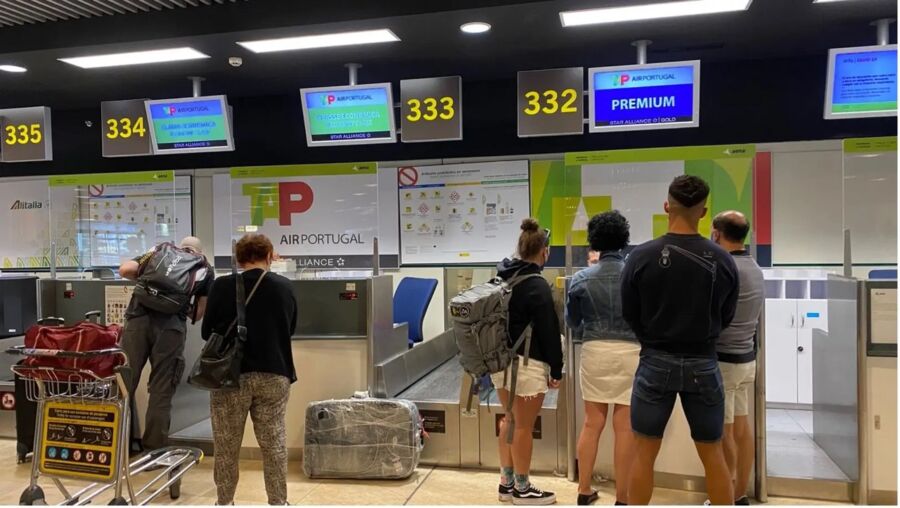 Estimates point to axing of 300 flights per day

The disaster TAP management and the government said should never happen continued yesterday, with fears today that strikes scheduled by furious syndicates will blight Christmas and the New Year.

Reports this morning suggest as many as 300 flights per day could be ‘grounded’ through the festive season – a total of 1,500 –  following decisions coming from yesterday’s meeting of the general assembly of SNPVAC, the national syndicate of civil aviation flight personnel.

Aside from confirming the strikes already scheduled for Thursday and Friday this week, members approved  “at least five more days of strike action before January 31“.

“All scenarios are possible”, SNPVAC president Ricardo Penarroias has stressed, in answer to questions ‘will the strike days affect Christmas and the New Year?’. “We don’t rule out any situations”.

“With the festive season at the door, thousands of passengers could end up being left on the ground”, admits Dinheiro Vivo. Penarroias “estimates that in these five days roughly 1,500 flights could be affected…”

To be fair, this miserable scenario has been on the horizon for months.

Penarroias told a parliamentary commission in October that strikes were “very likely” at the end of the year – the problem being ‘negotiations on the new company agreement’ in the context of the ‘restructuring programme’ of the airline, already costing Portuguese taxpayers €3.2 billion. Unions say management isn’t offering them ‘enough’; management says its hands are tied.

As in every battle, there are different sides, and different versions of ‘the truth’. For example, TAP announced last month that it would offer passengers affected by this week’s strikes alternative flights ‘at no extra cost’. Correio da Manhã reveals the ‘offer’ came in the form of only ‘two alternative dates’. For passengers these dates do not suit, there has been ‘no answers’ – and those requesting refunds have found them impossible to organise.

Another aspect adding to syndicates’ resolve has been the decision by the Court of Arbitration that ‘minimum services’ by TAP must be maintained. SNPVAC sees the decision as “serving the interests of TAP, and reducing the purpose of the strike”.