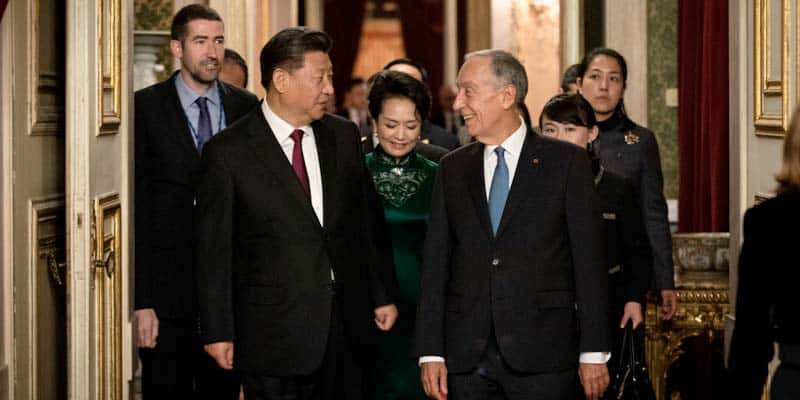 Chinese president Xi Jinping left Portugal on Wednesday after a seven-day charm offensive taking in Spain, the G20 summit of world leaders in Argentina and this tiny country on the edge of Europe – its oldest trading partner.

As the saying goes: a week in politics can be a long time – and in this case, President Xi has emerged very much the stronger.

He managed to head-off (for the moment) further tough trade sanctions with the US, and he almost completely charmed Portugal, telling assembled press as he stood beside President Marcelo that the relationship with this country is “arriving at its finest hour”.

It was a telling moment: a press conference in which no questions from the floor were permitted.

Portugal’s ‘president of affections’ Marcelo did what he does best, making his Chinese counterpart feel completely welcomed and going on to sign a dizzying number of co-operation agreements for sectors across the board.

But, in the distance, one could just make out the faint-pounding of ‘jungle drums’.

“The dragon has landed” wrote the foreign ministry’s press attaché on his Facebook page in which he went on to describe the Chinese leader as “DDT” (the acronym better associated with former BES banker Ricardo Salgado as it means ‘boss of all this’, or ‘Dono Disto Tudo’).

No sooner had Paulo Chaves made this ‘diplomatic gaffe’ than superiors were tripping over themselves to assure an investigation was underway to see whether “an infraction has been committed”.

“Paulo Chaves is not just any diplomat,” explained Público. “He is one of those responsible for the mission for the Portuguese presidency of the European Union in 2021 and head of press information…”

Chaves’ less-than-diplomatic comments, however, “come at a time when the role of Portugal in China’s strategy, and the requirement for balance between Portuguese interests and those of the European Union are being debated”, said the paper.

And this is the rub: international press reports last week warned that “EU leaders are concerned that state-owned or state-financed foreign enterprises could steal European know-how in a variety of areas, such as research, space, transport, energy and telecommunications”.

Almost all these sectors (and more) were being willingly opened up to China by Portugal as we wrote this text.

Said the Asia Times, EU leaders’ concerns stem from “accusations” that China has “failed to ensure a level playing field”.

European companies keen to operate within China’s vast market find themselves restricted and/or obliged to partner Chinese counterparts – “and in many cases share their know-how with them” – while Chinese have been acquiring assets in Europe very much more freely.

Portugal already has ‘Chinese investment’ at almost every turn.

While our ‘golden visa programme’ has opened the floodgates to Chinese buying up all manner of property, infrastructures from EDP to REN, renewable energies, banks, hotels, insurance companies – you name it – the Chinese have become involved.

Xi’s latest focus has been on investment in ports and transports – again largely because this government is so keen to ‘share’.

Say reports, PS Socialists “want to attract investment for Sines” – so that it can accommodate container ships carrying Chinese cargo – as well as for the Azores port at Praia da Vitória, on Terceira island (home of the strategic airbase shared for so many years with America).

There is also talk of “possible interest” in the automobile sector, while Portugal wants to increase exports of pork and grapes.

But looking at ‘the bigger picture’, our next-door neighbour Spain has certainly not been bending over backwards to accommodate Xi’s Belt and Road vision for globalisation.

Says Diário de Notícias, Spain “politely refused” to sign any new agreements with China during Xi’s three-day visit last week, on the basis that none of China’s ideas were offering enough for Spanish companies.

The paper’s source, Mario Esteban of UN think-tank ‘Elcano Royal Institute’, stressed that Xi’s strategy “is not really a multilateral initiative”, more a “series of bilateral agreements” with many projects “ignoring concerns about environmental and financial sustainability”.

Spain “is available to receive more Chinese investment, but not at any cost, and not in any sector”, said Esteban.

Portugal’s ‘sale’ of EDP to China Three Gorges has impacted Spain – where EDP also operates – and this has been the cause of tensions, he added, as Spain had strategically “rejected investment in this sector”.

Media in Portugal, however, has taken care not to dwell too much on this faint sound of ‘jungle drums’ wafting in from the rest of Europe.

For now, President Xi’s visit is being promoted as yet another stepping stone on the ‘road to recovery’.

Portugal’s President Marcelo will be travelling to China in April, when no doubt more ‘good news’ for this country will be announced

Any rumbles of concern – no matter where they come from – look like being diplomatically circumnavigated.

Once the aircraft touched down, the Chinese leader was ferried around in a motorcade of 50 armoured vehicles, with Portuguese authorities simply required as escorts.

The Ritz, hired in its entirety for a purported €2 million, was in relative lockdown, with residents in the area only allowed to come and go after being stopped and questioned.

Three satellites in triangulation followed ‘every step of President Xi’, while his entourage operated ‘primary intervention technology for the detection of hot spots and explosives’.

For two days, in the words of the people’s tabloid, national sovereignty was put to one side as Portugal opened as many doors as it could find to the ‘best friend’ it first started trading with during the Ming Dynasty, over 1500 years ago.