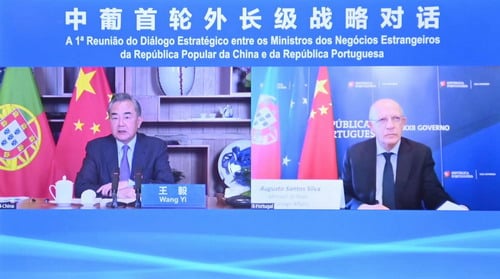 China is reported to be ‘seeking Portugal’s support’ in opposing what it sees as the ‘politicising’ of the search for the new coronavirus’ origins.

As a number of countries – the UK and United States being perhaps two of the most significant – don’t appear to have accepted the conclusions of the first World Health Organisation investigation into how Covid-19 came into being, China’s foreign minister Wang Yi has reportedly ‘held a virtual meeting’ with his Lisbon-based counterpart Augusto Santos Silva to say “he hopes the two nations can jointly oppose political manipulation of coronavirus origin tracing”.

A statement released by Mr Wang said: “(We) hope we can jointly oppose political manipulation of the coronavirus origin tracing, urge against any ‘political virus’ and safeguard the overall situation of solidarity against the pandemic”.

This was followed by something of a sweetener in which Mr Wang “added that China supported Portugal in performing a bigger role in international affairs, and would support more Chinese enterprises to invest in the country , and allow the countries’ relationships to bring greater economic benefits”.

The virtual meeting does not seem to have been reported by European media.

News of it appeared in the South China Morning Post on Friday evening (European time).

The paper stressed that Mr Wang said “the sanctions imposed by the European Union on China over alleged human rights violations in Xinjiang were not conducive to good ties between China and Europe”.

Portugal’s minister of foreign affairs is quoted as saying: “Science and politics should be separated; origin tracing is for a better future instead of aiming to target or blame certain countries. Portugal supports investigations that uphold science and professionalism, and is against any politicising of such work”.

The South China Morning Post went on, with: “Although Portugal’s clout in Europe may be limited by its relatively small economy, it has been viewed by Beijing as one of the easier EU member countries to work with, at a time when China’s ties with the EU have soured over human rights issues and the related stalling this year of the EU-China Comprehensive Agreement on Investment.

“The Portuguese government has said it does not see China as a threat. It has also been less forceful about human rights than some bigger EU members, and last year complained after George Glass, then the US ambassador to Portugal, said Lisbon must choose between the United States and China, or risk the consequences. Yet Silva has also rejected suggestions that Lisbon was a “special friend of China”.

This could be the part of the statement that prompted the European media ‘blank’. Portugal has a history of ‘running with the hare and hunting with the hounds’ – and the government may not consider this to be the opportune moment to add to it.

The Chinese statement nonetheless ended with: “In 2017, Chinese investment in Portugal totalled US$4.4 billion, more than three times the US$1.3 billion from the US, according to Organisation for Economic Cooperation and Development figures cited by the European Think-tank Network on China”.

The message is loud and clear. It followed China’s ‘rejection’ on Thursday of the World Health Organisation “plan for a second phase of investigation into the origins of the new coronavirus, which includes the hypothesis that the virus could have escaped from a Chinese laboratory”.

Complementing the South China Morning Post story was a much longer statement published on the official page of the Ministry of Foreign Affairs of the People’s Republic of China in which it appears that Augusto Santos Silva has expressed Portugal’s willingness to “cooperate with China on vaccines”.

He guaranteed, said the ministry, that the Portuguese market “will always be open to Chinese enterprises…He hopes to further cement the ties between the two sides in the post-COVID era and deepen bilateral cooperation… Portugal is willing to enhance coordination and cooperation with China in international affairs”.