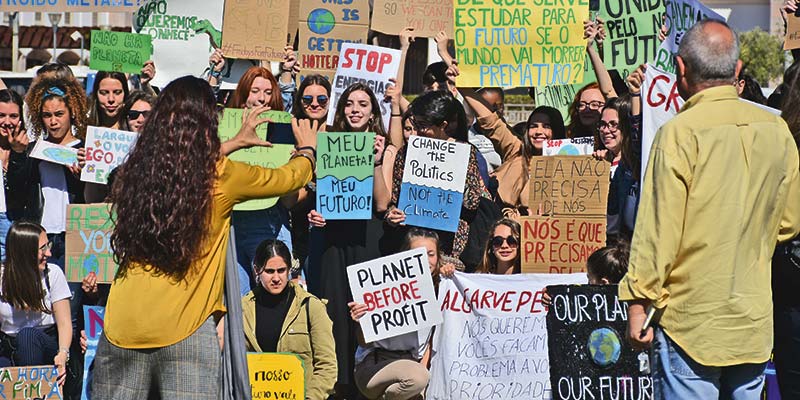 In the first ever initiative of its kind, schoolchildren throughout Portugal went on strike last Friday in support of ‘saving the planet from the apocalyptic decision-making of adults’. With scant support from many of the country’s schools, the youngsters took a stand and have promised “this is only the beginning”.

Writing on Facebook after the wave of marches that took place in the Algarve, Lisbon, Porto, Setúbal, the archipelagos and many places in between, the ‘Greve Climática Estudantil’ movement vows that more initiatives are planned.

There will be “negotiations with town councils”, “more communication with government” and more efforts to force change and power “urgent measures” to tackle the situation of climate crisis.

“Together we are stronger,” said organisers inspired by what has become a global call-to-arms powered by the extraordinary speeches of one disarmingly direct teenager from Sweden (see below).

“We want people to know that this generation of young people isn’t prepared to sit things out on the sofa,” said the Portuguese student group. “We are watching, and because no one is prepared to do anything for us, we’re ready to roll up our sleeves to fight for climate justice. We are not just young people: we are citizens. And we won’t stop.”

In some areas, school principals told Público that they would be marking their ‘rebel pupils’ down for missing tests and classes.

But in the United Nations, an adult whose name carries clout is right behind this growing youth movement.

Secretary general António Guterres says: “I know young people can and do change the world.”

As a former prime minister of Portugal, one imagines his words may encourage the dismissive school directors interviewed by Público to keep any planned ‘punishments’ for ‘errant pupils’ to a minimum.

Writing a guest column in the Guardian newspaper on Saturday, Guterres told the protestors: “Your voices give me hope.”

His text admitted: “My generation has failed to respond properly to the dramatic challenge of climate change. This is deeply felt by young people. No wonder they are angry.”

In Vila Real de Santo António, Tavira, Faro, Loulé and Portimão, the Algarve’s youngsters embraced the moment, telling reporters running along beside them: “We want to be heard because the government is not doing enough.”

In the background, there is the ‘threat’ of oil and natural gas exploration – both here and in central Portugal – that this government has refused up till now to renounce.

University student Inês Nunes, studying psychology in Faro, told television cameras: “We only have 12 years to reverse what has been done by former generations so that we don’t destroy the only planet that we have…”

It’s the message that has been sounded in countless climate-change conferences – but “emissions just keep growing”.

Said Guterres in his article in the Guardian: “These schoolchildren have grasped something that seems to elude many of their elders: we are in a race for our lives, and we are losing.

“The window of opportunity is closing – we no longer have the luxury of time, and climate delay is almost as dangerous as climate denial.”

Guterres’ position gives him enormous opportunity to make a difference and this he appears to be attempting.

“I am bringing world leaders together at a climate action summit later this year,” he wrote.

“I am calling on all leaders to come to New York in September with concrete, realistic plans to enhance their nationally determined contributions by 2020, in line with reducing greenhouse gas emissions by 45% over the next decade, and to net zero by 2050.

“The latest analysis shows that if we act now, we can reduce carbon emissions within 12 years and limit global warming to 1.5°C.

“But if we continue along our current path, the consequences are impossible to predict.”

His message also is ‘not new’. But the stirrings of children here and across the globe are – no matter how much authorities may seek to belittle them.

Something this movement of schoolchildren has also done is shine a light on ‘labels’.

The pigtailed warrior who started it all has Asperger’s, we’re told. Anyone who thought Asperger’s was a disability will now need to perform a mental reboot:

Greta Thunberg, 16, climate change warrior
This is the name of the schoolgirl who used to sit at the back of the class in her hometown in Sweden “saying nothing”.

Diagnosed with Asperger’s at the age of 11, it is a condition that means Greta “overthinks”.

Climate change and the fact that adults “did not appear to be taking it seriously” led to her initially becoming seriously depressed, and to then deciding to take matters into her own hands.

She staged a lone protest outside the doors of the Swedish parliament last summer, intent on forcing the government to reduce carbon emissions in line with the Paris Accord.

On the second day of her protest, people started joining her. “After that, there were people there all the time.”

Since then, Greta has addressed the United Nations Climate Change Conference in Poland, the Davos World Economic Forum and given countless talks and interviews.

Her messages are always blunt and simple. No flowery words or clever sentence structures. Just truth – which seems to cut through all the ‘arguments’ like the proverbial knife through butter.

As she told world leaders in Katowice, shortly before her 16th birthday: “You are not mature enough to tell it like it is. Even that burden you leave to us children.”

And last week, this country’s children rose to the challenge and promise to move forwards for fundamental change.

It’s impossible not to feel excited.