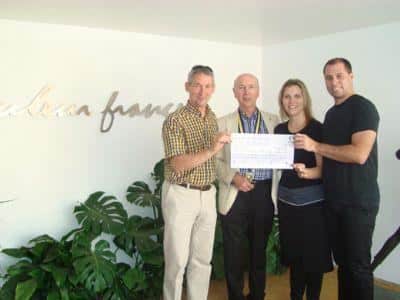 Partners of the Restaurante Couler France in Almancil presented a donation of 1,576 euros to the Almancil Rotary Club charitable fund.

The funds were raised by the restaurant donating 50 cents from every cover ordered by clients between May and December 2008. The same initiative is running again this year and Harry Hill from the restaurant has promised a minimum donation of 2,500 euros to the Rotary Club.

Club president Peter Hinze accepted the cheque on behalf of the club and said the money would be used immediately to help local causes.