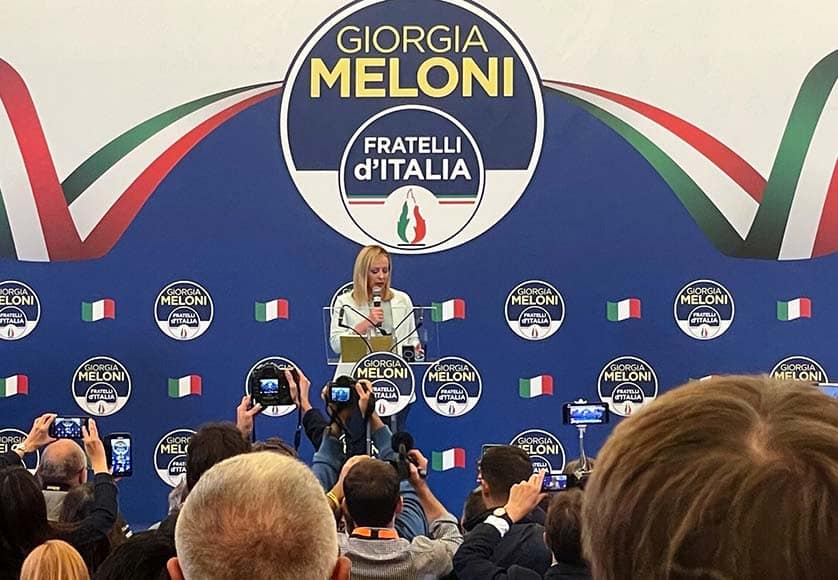 CHEGA says “winds of change” will reach Portugal too

Portugal’s right-wing nationalist party CHEGA has applauded the results of the Italian election, which has been won by a conservative alliance led by far-right party Brothers of Italy.

In a statement to the press, Portugal’s third political force congratulated the “Italian right-wing for the results obtained” and said that there will be a “true change of policies” after this election.

The party also said it hopes that a government will be “formed quickly” in order to provide the Italian people with a “strong and stable governing solution capable of facing the hard times that are ahead.”

The statement also alluded to the growing number of European countries moving to the right of the political spectrum.

“After Sweden, it is now Italy that has given another clear sign that the European continent is undergoing a deep change,” the party said, adding that voters are “trusting more and more in parties that defend, without reservations, the sovereignty of peoples, their traditions and civilizational values.”

CHEGA also said that “the winds of change will reach Portugal.”

Giorgia Meloni, leader of Brothers of Italy, is set to become the first female Prime Minister of Italy .

Speaking to her supporters from a hotel in Rome, she said this is just a “starting point.”

“From tomorrow, we have to demonstrate what we are worth. It’s time for responsibility — we won’t betray Italy… We will govern this nation on behalf of everyone,” Meloni said.

According to state broadcaster Rai, the Meloni-led coalition, which features Matteo Salvini’s nationalist Northern League and former PM Silvio Berlusconi’s Forza Italia — won just over 43% of the vote, “enough to give it a comfortable parliamentary majority.”

The coalition’s victory has also been celebrated by other right-wing forces across Europe.

Marine Le Pen, leader of France’s far-right National Rally party, said on Twitter: “The Italian people has decided to take its destiny in hand by electing a patriotic and sovereigntist government.

“Congratulations to Giorgia Meloni and (League leader) Matteo Salvini for having resisted the threats of an anti-democratic and arrogant European Union by winning this great victory,” Le Pen added.

🇮🇹👏Congratulations @GiorgiaMeloni, @matteosalvinimi, @berlusconi on the elections today! In these difficult times, we need more than ever friends who share a common vision and approach to Europe's challenges.

“In these difficult times, we need more than ever friends who share a common vision and approach to Europe’s challenges,” he said.

Meanwhile, Santiago Abascal, leader of Spain’s Vox (Spain), said on Twitter: “Giorgia Meloni has shown the way for a proud, free Europe of sovereign nations to be able to cooperate for the security and prosperity of all.”