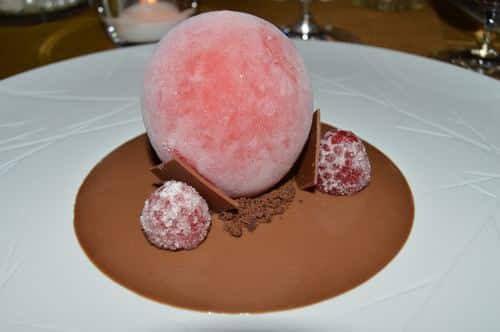 Event || Well-known German Chef Heinz Beck celebrated 20 years of success running his three Michelin-starred restaurant La Pergola in Rome with a special dinner on Monday at the Conrad Algarve in Quinta do Lago, where he also leads a team of chefs at the hotel’s restaurant Gusto.
The event attracted a full house of gourmets who each paid €250 to taste the dishes prepared by Chef Beck and what they received in return was a unique and unforgettable gastronomic experience.
The special anniversary event was celebrated at La Pergola in Rome as well as at ‘Gusto by Heinz Beck’, the only restaurant under his control in Portugal.
Chef Heinz Beck prepared a selection of his nine best signature dishes, which he has improved throughout his extensive career, and each course was paired with carefully selected Portuguese and Italian wines.
Dishes on offer included his legendary past dish ‘La Pergola Fagottelli’, ‘The Earth’, one of the most enjoyed dishes, and the superb dessert ‘Icy ball of red fruit tea cream with candied raspberries’ was the perfect ending to a most enjoyable evening.
Ever cheerful and engaging, Chef Heinz Beck greeted guests and was visibly satisfied by their response to his menu.
By Sara Alves