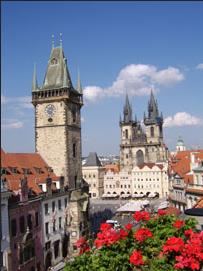 ARE YOU wondering where to head for your Spring Holiday? Why not try the Czech Republic?

Spring is the most attractive season there and you can fill your time discovering castles, chateaux, museums and skansens, which are traditional wooden houses. Or why not take a stroll in the fabulous and picturesque countryside.

Prague is the capital of the Czech Republic and since the fall of the Iron Curtain, Prague has become one of Europe’s (and the world’s) most popular tourist destinations.

Prague is the sixth most visited European city after London, Paris, Rome, Madrid and Berlin. Prague suffered considerably less damage during the World War II than some other major cities in the region, allowing most

of its historic architecture, from Art Nouveau to Baroque, Renaissance, Cubist, Gothic and Neo-Classical to remain intact and coexist with the ultra modern buildings.

Prague is situated on the river Vltava in central Bohemia and has been the political, cultural and economic center of the Czech state for over 1,100 years.

The city is home to nearly 1.2 million people, while its metropolitan area is estimated to have a population of over 1.9 million.

Prague is widely considered to be one of the most beautiful cities in Europe and is known as the Fairy Tale city as many movies are filmed there.

Some of the best-known sights are The Old Town (Stare Mesto), with its Old Town Square and the Astronomical Clock. The Wenceslas Square, with the National Museum, and The Lesser Quarter, with the Majestic Prague Castle overlooking the romantic Charles Bridge, are also fantastic areas to visit.

You will also be captivated by the Czech countryside, which is an ideal location for active holidays, like cycling and water sports. There are also over 70 golf courses and many ski resorts for winter fun.

The Czech Spas are famous around the world, where tourists can enjoy the traditions which go back centuries. Guests can receive

treatment or just relax in the pleasant surroundings.

One of the biggest traditions is the Burning of the Witches. Since time, immemorial people have believed that there are days when evil forces have more powers than at other times of the year.

This is particularly true of the night between April 30 and May 1, when fires are lit on raised ground to protect against witches. The tradition is still alive today and in the evening thousands of fires are lit across the Czech Republic. Women and girls dance around them dressed as witches and it is one of the most enjoyable celebrations in the calendar.

There are great gifts to buy such as glass, jewellery, crystal, Bohemian garments or natural cosmetics from the internationally renowned Botanicus shop in the Old Town.

Younger children will enjoy the traditional wooden toys. Prague offers large shopping centres and streets as Parizska and Prikoy, situated in the heart of the city, provide many boutiques and international brands. One of the most magnificent festivities is the Christmas Fair, which is held in Old Town and Wenceslas Square.

For more information, please contact Via PG Travel, who office a wide selection of services, including the corporate. Call 289 398 412, fax 289 394 728 or e-mail reservations@via-pg.com