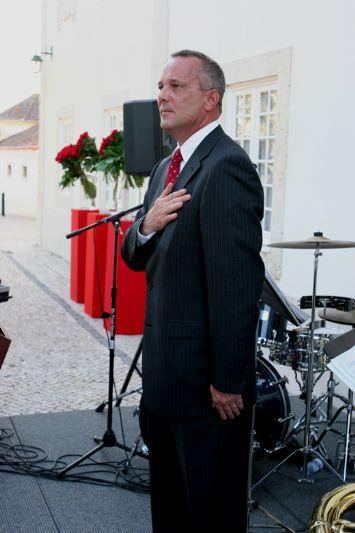 This year’s 233rd anniversary celebrations of the United States Declaration of Independence marked a return to the more traditional Garden Party.

It was a rather sober affair in the glorious settings of the United States Chancery mansion at Sete Rios and it seems this year’s party was a return to traditionalism because the US Ambassador to Lisbon, Thomas F. Stephenson (December 2007-June 2009), had already left and the chair is once again vacant.

However, listening to the carefully guarded remarks from Chargé d’Affaires David Ballard, one could perhaps detect the new Obamarist direction that United States foreign policy could be heading for in the future.

We heard words like “shared objectives”, “a willingness to improve all that we can improve” and a “desire to make our world a better place”.

“It is a great pleasure to have so many of our friends here today, who share our values and who share our desire to try to do whatever we can to make our world a better place,” he said.

Even the music was different this year. Instead of the Great American Songbook, we had more popular standards from the likes of Marvin Gaye, perhaps another nod to the present occupant in the White House or maybe indirectly inspired by Motown’s 50th Anniversary.