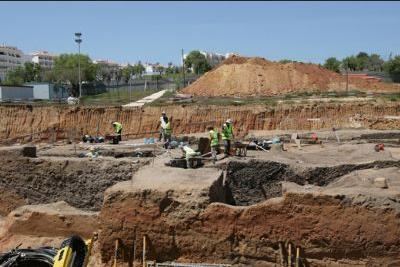 Archaeologists have unearthed a leper and a slave cemetery, plus other structures and artefacts, while excavating in the construction site of a new car park in Lagos.

The cemeteries, which date to between the 15th and 17th centuries, are located on the site of the future Anel Verde subterranean car park outside the main city walls.

Archaeologist Dr Rui Almeida said that the discovery of more than 20 skeletons, whose deformities correspond to leprosy, make Lagos a reference point for the study of the disease and the history of medicine.

According to Dr. Rui Almeida, the discoveries have led to a delay in the construction of the car park, with builders and archaeologists working simultaneously on the site to ensure the careful removal of skeletons and artefacts, many of which will be taken to Coimbra University in northern Portugal for further study.