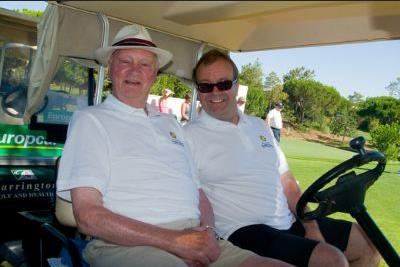 Sir Bobby Robson and a number of UK and Portuguese sporting stars raised a total of 63,000 euros for the children’s refuge in Faro, Refúgio Aboim Ascenção, while in the Algarve on Saturday, July 4.

Sporting legends from the world of football were at the Vila Sol golf course near Vilamoura to play a round in the Sir Bobby Robson Golf Classic VI, with proceeds going to the charity fund, while in the evening a gala dinner and auction helped to boost the money raised.

“The generous donations of everyone at this event are vital for our continuous projects at the home.”

Supporting the Algarve was an obvious choice for Sir Bobby, who spent four years in Portugal as the manager of FC Porto and Sporting Lisbon between 1992 and 1996.

The winning team on the day finished with 91 points and was led by Norwich City’s Scottish manager, and former club goalkeeper, Bryan Gunn.

The gala dinner was held in the ballroom of the Vila Sol hotel and other stars, including former football manager Ron Atkinson, were there to enjoy the food and entertainment.

This was followed by a very successful charity auction hosted by the UK’s channel five television presenter Jonny Gould.

Among the 16 lots at auction, unique golfing memorabilia from three-time major winner Padraig Harrington was bought for 3,400 pounds ,and a Manchester United shirt signed by Sir Alex Ferguson and the team went for 3,200 pounds. The highest priced item was a shirt signed by all the celebrities at the golf classic, which was sold to Russian businessman Gleb Fetisov for 12,000 pounds.

More than 340,000 euros has been raised by this event in its six-year history, which Sir Bobby hopes will continue for many years to come.

“I have put my name to this charity and hope that it will become my legacy,” he said.