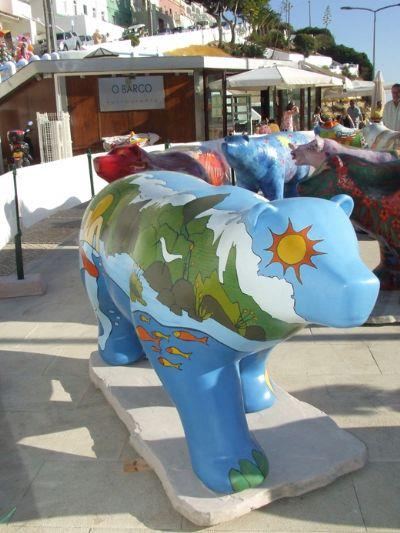 Two lovers of art have given the main square in Carvoeiro a much-needed boost following controversial works to revamp the access roads into the village as well as the beach front area.

After several months of road works, dust, rubble and road closures and diversions, business owners in Carvoeiro can now breathe a sigh of relief and make the most of the rest of the summer as tourists are now able to move around the village easily and enjoy what it has to offer (see Algarve Resident, March 27 edition).

As well as regular live music performances on the square and on the busy Rua dos Pescadores, works of art are now in full view of anyone who visits the village.

Sylvain Bongard, a Geneva-born artist based in Ferragudo, offered his services to Lagoa Câmara by hand-painting a 15 metre long tile panel inspired by the creatures of the sea and the fishing industry, which decorates a wall on the main square.

“I’ve wanted to present Lagoa council with my work for a while and was pleased that Joaquim Cabrita, councillor for culture at the Câmara, found that wall in Carvoeiro,” Sylvain told the Algarve Resident. “The wall measures 15 metres long by 1.70 metres tall and the panel took me two months to complete.”

Sylvain says 60 per cent of the panel is dedicated to nature and the remainder to people. “Although a fisherman is centre stage on the panel, I mainly wanted to paint sea nature.”

As well as admiring the work of Sylvain, visitors to Carvoeiro square are able to view The Dance of the Bears exhibition, which was inaugurated on July 11. Sculptor Karl Heinz Stock, owner of the Quinta dos Vales winery and sculpture garden in Estombar, and his team of artists created around 50 unique, three-dimensional life-size bear sculptures, which are on display at the square until July 23.

The bears will then move on to Monchique’s Praça Central until August 9, Portimão Museum until August 16, Fatacil in Lagoa from August 21 to 30 and Loulé castle from September 18 to October 10.

For further information about The Dance of the Bears exhibition, please call Silvio Silva on 919 766 565.