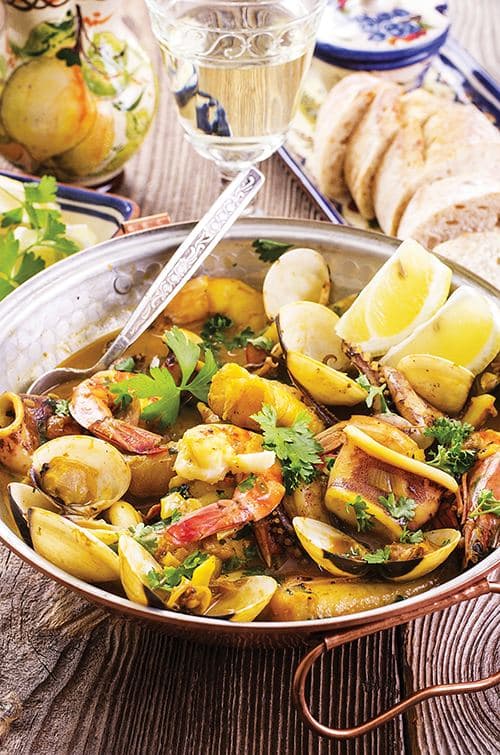 Popular with seafood-lovers everywhere, the cataplana is a regional culinary classic

Its appearance may be unusual, but the unique cataplana is a true symbol of the Algarve’s culinary tradition, and a delicious one at that. Named after the cookware in which it is prepared – a clam-shaped dish that’s traditionally made of copper –, the cataplana is a typical Portuguese seafood dish whose origin is inextricably linked to the presence of Arabs from North Africa in the Algarve many centuries ago.

A relative of the North African tagine and a forerunner of the modern pressure cooker, the cataplana comprises two clamshells joined by a hinge, which clamp down to seal the dish hermetically so the food is steam-cooked in its own juices. Originally made from zinc, the utensil was later produced in copper by master craftsmen, which is credited with distributing the heat evenly and giving the contents their special flavour. Nowadays, the cataplana can also be made of stainless steel. Inside, delicious Mediterranean flavours abound, with traditional ingredients including clams, prawns and fish cooked in an aromatic stew base of tomatoes and peppers.

An extremely versatile dish, there are many versions of the cataplana here in the Algarve, but a particularly delicious recipe comprises monkfish, prawns, clams, Portuguese chouriço sausage and a medley of fresh, bright vegetables, all perfectly seasoned. The dish can be made with alternative ingredients, such as octopus, cod or even meat added to the clams and prawns, but the ideal accompaniment is always a good white or green wine.

For the recipe, we recommend using a high-quality, medium to large cataplana dish, which can be purchased at any handicraft shop.

Method
Heat the olive oil in a pan and sauté the sausage and the ham.

Add the peppers and tomatoes and cook for a few minutes.

Add the white wine, piri-piri and coriander, and blend.

Sauté the monkfish in a separate pan with olive oil, salt and pepper. Lay the monkfish in the cataplana pan and place the sauce, clams and prawns on top, close the pan and leave it cooking for more or less five minutes.

Add a little Pernod to taste and decorate with chopped coriander before serving.