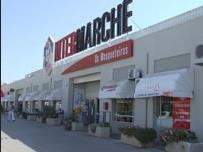 THIEVES STOLE a multibanco cash machine from the Intermarché supermarket on the EN124-1 between Lagoa and Carvoeiro in the early hours of Thursday (May 21) morning.

The break-in at the isolated supermarket occurred at approximately 6am.  The thieves managed to raise the metal security shutter that protected the entrance to the store and then prised the main doors open to gain access to the cash machine (ATM) in the entrance lobby.

The cash machine was removed and then passed under the security shutter before the culprits fled the scene in an unknown vehicle.  Security guards employed by Intermarché patrol the car park during operational hours but there were no witnesses to the break-in, said a spokesman from Lagoa GNR.

The machine was later found almost 15 kilometres away in a field on the outskirts of Portimão but none of the money has been recovered by police.

The lack of witnesses to the crime is said by police to be due to the time the crime was committed and the fact that local businesses near Intermarché and the site where the machine was dumped had yet to open for the day.

A spokesman from Intermarché confirmed that the cash machine had been taken at approximately 6am on Thursday.  The spokesman told The Resident: “We do not know how much money was in the machine when it was taken”.

The Resident contacted the local police in Lagoa who confirmed the theft but were unable to comment any further on the case and also could not say how much money had been taken from the multibanco machine.

The Lagoa branch of the French supermarket chain Intermarché is popular with all residents in the Carvoeiro and Lagoa area. The Intermarché chain has stores mainly in France but also has stores in many European countries including Portugal, Belgium and Spain.