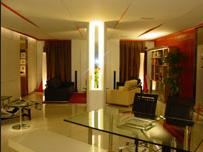 PORTUGAL’S MOST important annual interior decoration fair, Casa Decor, was due to open its doors in Lisbon’s Baixa Chiado on Wednesday, November 15.

Already in its 12th year, this year’s splash of colour, form and line from the latest creations that Portuguese interior designers have to offer, will be hosted at the Valadares Palace in Largo do Carmo 32.

Organisers Casa Decor 06 chose the historic palace for its proximity to Lisbon’s oldest and most traditional shopping district.

The historic palace in Largo do Carmo is right by the ruins of the Convento do Carmo next door to the headquarters of the GNR, which served as the operations centre for the holed-up Marcelo Caetano government on the April 25th Revolution in 1974.

Just as in other Casa Decor exhibitions this year, the latest being in Porto, the Lisbon exhibition will show off all the latest trends in interior design, furnishings and decoration from more than 40 exhibitors spread out over a space of 4,000sqm.

The design exhibition will also feature 20 stands and displays from other countries in Europe, the US and Latin America.

The exhibition, open to the public from November 16, will run right up to December 17 daily between noon and 7pm, except Thursdays, Fridays and Saturdays when the exhibition will have extended opening hours until 11pm. Entrance tickets cost 10 euros, while under 25’s and pensioners over 65 pay five euros.