Portugal Resident
Home Community Carols on the cliffs … for the hardy! 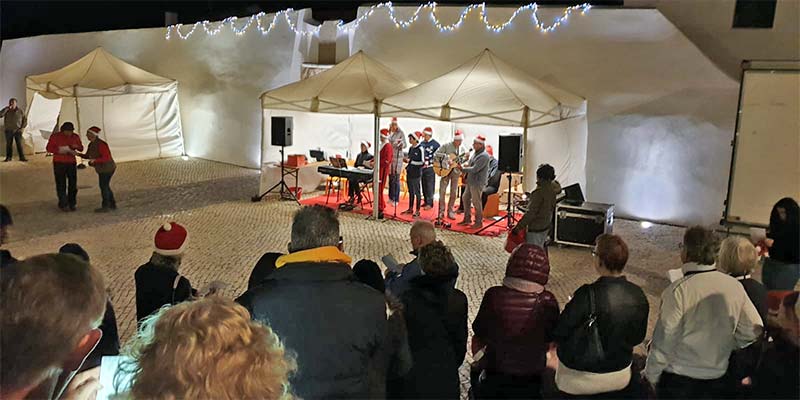 In its second glorious year, and in spite of the windy weather due to Storm Elsa, ‘Carols on the Cliffs’ was held on December 19 at the Carvoeiro amphitheatre behind the church.

Thanks to powers beyond our control, the rain held off while 150 hardy souls braved the gusty wind to sing together and generate some old-fashioned Christmas spirit. Sustenance was at hand with drinks tents serving mulled wine and mince pies as well as regular bar fare, manned by Nicola Baker and her team.

This year we were grateful for music back up provided by Mags Taylor (keyboard), Keith Roberts (guitar), Pat O’Reilly (guitar) and Ulf Baggström (drum box). We sang in every language – carols from four traditions: English, French, German and Portuguese – and many of them multilingual. We were led by Jean-Luc Obadia, Kerstin Scholz, myself and Rafael Ramalho, also acting as Portuguese interpreter.

The stars of our evening had to be the nine young ladies from the Portimão girls’ home Casa de Nossa Senhora de Conceição (CNSC) who performed a beautiful song as our guest artists.

Primarily a community singing event, it was also a fundraiser and people gave generously. We raised €500 for local charities amongst which the Portimão girls’ home CNSC and the Carvoeiro church renovations. A tremendous thanks to all who attended and made this sum possible.

Finally, our thanks go to the Paróquia de Lagoa and the Câmara de Lagoa who assisted with tents, power, lighting, sound team and printing.

See you all next year!