Caroline Mohr (nee Larsson) knows well of life’s ups and downs. When Caroline was eight years old, she was tricked into playing golf for an ice cream by her Dad, and she never looked back.

Later on, in 2011, ‘Carro’ was a 22 year-old Swedish national golfer “practising, eating and sleeping” in order to follow her sister Louise onto the Ladies European Tour, with a complete golf game built around excellent ball striking.

The sisters were lunching in Christchurch, New Zealand, one day when they found themselves running for their lives through the streets as buildings collapsed in that infamous earthquake that killed 185 people. 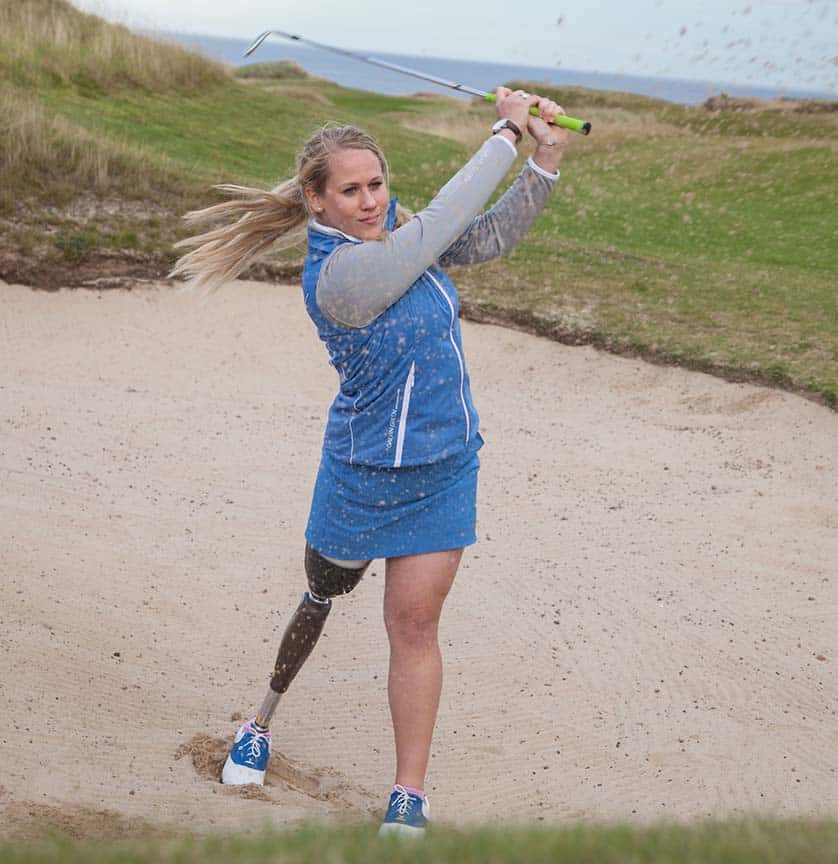 A matter of weeks later, after struggling with a troublesome knee, Caroline was expecting encouraging words from her doctor only to learn she was suffering from an aggressive form of bone cancer. Amputation from above the right knee: the news was, of course, devastating.

Before the operation, she found herself using the same mental techniques from golf, formerly for first tee pressure, in readiness for when she would have to walk through the doors of the hospital and wait for surgery. This capacity to focus, borne out of golf, helped Carro look her surgeon in the eye and say: “When you take my leg, you are going to give me life. He then said, ‘let’s make a handshake to that’, and that felt really good.”

Five days after surgery, she was in the hospital’s rehab wing when she spotted and picked up a golf club, and she remembered her “happiness as an eight-year-old girl … eating ice creams”. Just two months later, Carro played with Louise successfully in the Swedish Championships completing a dream return. Her name is now also engraved on the winner’s trophy of the European Individual Championship for 2012 and 2014, and Carro has since been a much valued supporter of EDGA (European Disabled Golf Association), promoting the game to new players of all abilities.

Today, Caroline is a motivational speaker, a global ambassador for Allianz and a supporter of the charity the Star for Life programme; she has raised thousands of pounds to help finance a school in South Africa to help children in one of the most vulnerable areas regarding HIV and AIDS.

It was during her first trip to the KwaZulu-Natal area when Caroline was touched by the children and their desire to achieve their dreams.

Caroline says: “Having a dream can make it easier to take decisions for yourself for the future… and try to build your path in life. It was really compelling to help build dreams because, for me, this played such a big role, to live a dream for the future to get back out there even when life was so hard and so tough.”

Dreams and nightmares: living a life seems to require both. But it is often major change that shapes character and forces a person to find their best qualities. That handshake with Carro’s surgeon was a turning point she will never forget.

– Watch/listen to profiles of EDGA players at www.edgagolf.tv

– Learn how to get involved at www.edgagolf.com