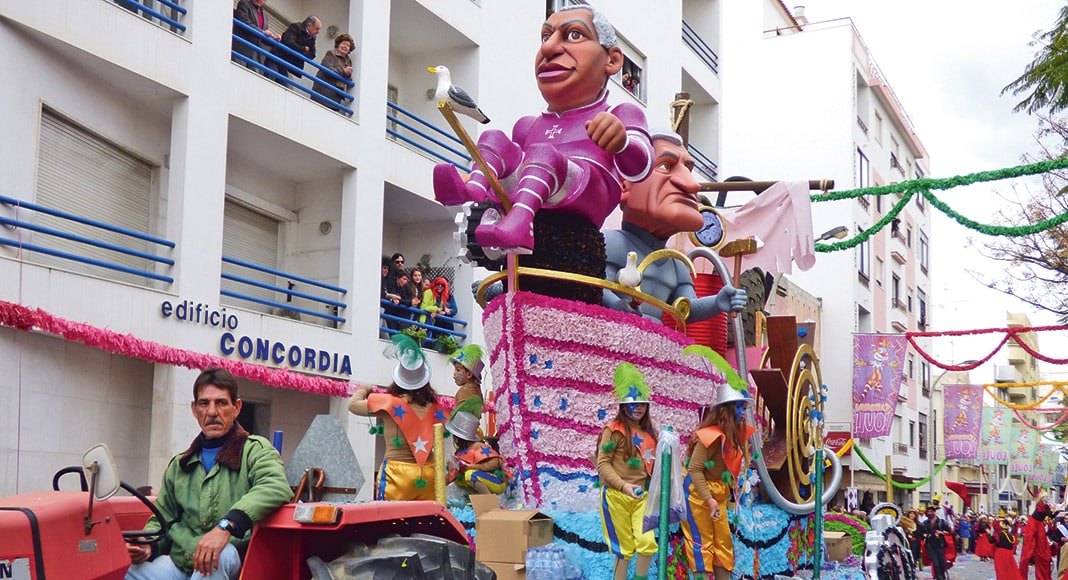 Carnival day is February 25. The date varies each year because Carnival is always the day before Lent starts and, therefore, 47 days before Easter, which also varies each year, because Easter is the Sunday that follows the first full moon after the equinox, which is when day and night have the same number of hours.

Carnival celebrations may derive from pagan festivals of ancient Rome and Greece that celebrated the end of winter and the coming of spring. Then, slaves and the poor were allowed to dress up and be waited upon by their masters. Carnival took on a religious significance for Christians as a celebration when people would eat and drink all their rich food before abstaining from eating meat for lent. The word Carnival derives from the Latin carnis (meat) and vale (farewell), which means ‘goodbye to meat’.

In Portugal, most major towns and cities have their own Carnival parades and it is a fun time loved by children and adults alike. Primary children parade around town before their three days’ Carnival holidays and during the weekend before Carnival, as well as the day itself when everyone mingles in the streets to watch the parades and to throw streamers and handfuls of coloured paper confetti at each other.

It is one of the most festive times of the year, celebrated since the 15th century, but back in the day it was a dirty and violent festivity whereby revellers would fight in the street with sticks and brooms and throw at each other eggs, dirty water, beans, sand bags, etc.

In the 20th century, parades and parties in Lisbon would bring the crowds together to celebrate along the main avenues and I have many fond memories of Carnival when I was growing up near Lisbon.

We used to have a week off school and every day we dressed up and partied with our friends in the streets and at the local community centre balls. Of course, in those days everyone made their own costumes, although my sisters had the added advantage of having access to my father’s old costumes from his theatre shows, but they never fitted my rather robust body as his dancers had tiny waists! My mother was very inventive often wrapping towels on my head and body and sewing on empty toiletries packaging to dress me up as ‘Madame Toilette’!

Mention the word carnival and everyone automatically thinks of Brazil and the glamorous feather-adorned samba dancers, but did you know that it was Portugal that took the carnival to Brazil? Their celebrations began in the 1720s influenced by people coming from the Azores, Madeira and Cape Verde who would celebrate for three days dressed in their traditional costumes and play tricks on each other in the decorated streets. It was during the Renaissance period that masque balls emerged. The Portuguese brought the samba music back to Portugal and today we have a mixture of various traditions.

Torres Vedras is the most famous Carnival in Portugal which continues the tradition of mocking and ridiculing the government, but each town or city can have its own traditions. For example, in Alcobaça everyone dresses in white and celebrates for five days.

In the Algarve, the Loulé Carnival has been going for over 100 years and it is the most renowned. This year’s theme is ‘The Cinema’ but there will no doubt also be the traditional political satire depicted on some of the 14 floats which are made by local clubs, schools and associations. Last year there was a huge caricature statue of the then British Prime Minister Theresa May on a Brexit float!

Over 600 individuals will be dancing, parading and entertaining the crowds in what is surely to be a fantastic show which can be seen on February 23, 24 and 25. Over 100,000 visitors are expected to line the streets to watch the procession.

Last year, Loulé council decided to go green by distributing recyclable 100% biodegradable cups to all the bars and restaurants involved in the Carnival and these were then collected in specific containers to be taken to make compost.

This year, I am looking forward to Ferragudo’s Carnival (on the 25th) as they will be celebrating 500 years of history with simultaneous traditional Carnival parades from Portugal, Brazil and Italy.

Representing Portugal will be the ‘Entrudo Chocalheiro’, an ancient Celtic religious festival celebrated in the northern district of Bragança and known as the most genuine Carnival in Portugal because it is one of the oldest traditions still being practised today.

Men dress up as ‘Caretos’ wearing hooded suits made of colourful red, green and yellow woolen stripy fringes and with cattle bells tied around their waists. They wear devil-like brass, leather or wooden masks and run through the village streets hitting spectators’ heads with their long hoods and looking for single girls which they grab and wiggle their hips at to hit them with the bells. So watch out!

Also representing Portugal will be the ‘Zés Pereiras’ music bands in existence in the Entre Douro and Minho regions since the 19th century, where musicians parade playing percussion instruments such as drum boxes and bag pipes and are accompanied by ‘giants and huge heads’ characters.

Brazil will be represented by glamorous Samba dancers in their skimpy costumes bringing a touch of Rio de Janeiro to the Algarve! I hope the weather is warm!

Finally, the Carnival of Venice will be represented with their world-famous elaborate face masks made from porcelain, glass and leather adorned with feathers, gold leaf and gems. The Venice carnival was first recorded in 1268 but was banned in 1797. Venetians could be masked for up to six months of the year and some took advantage of this to be incognito when gambling or visiting houses of ill repute!

The Carnival returned briefly in the 19th century mostly for private events but was then outlawed by the fascist government in the 1930s, only re-emerging in 1979 when the government decided to promote Venetian history and culture which is today a huge tourist attraction.

Whether or not you dress up, it is worth going to see one of the parades and to be part of the mad and wonderful Carnival festivities but do watch out for flying sweets and being teased by jolly street entertainers! 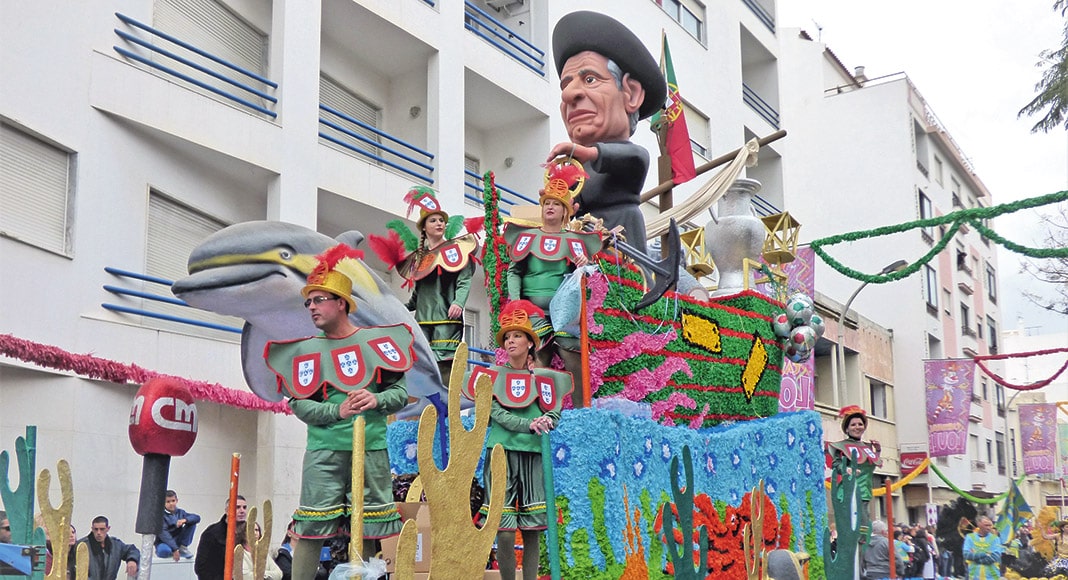 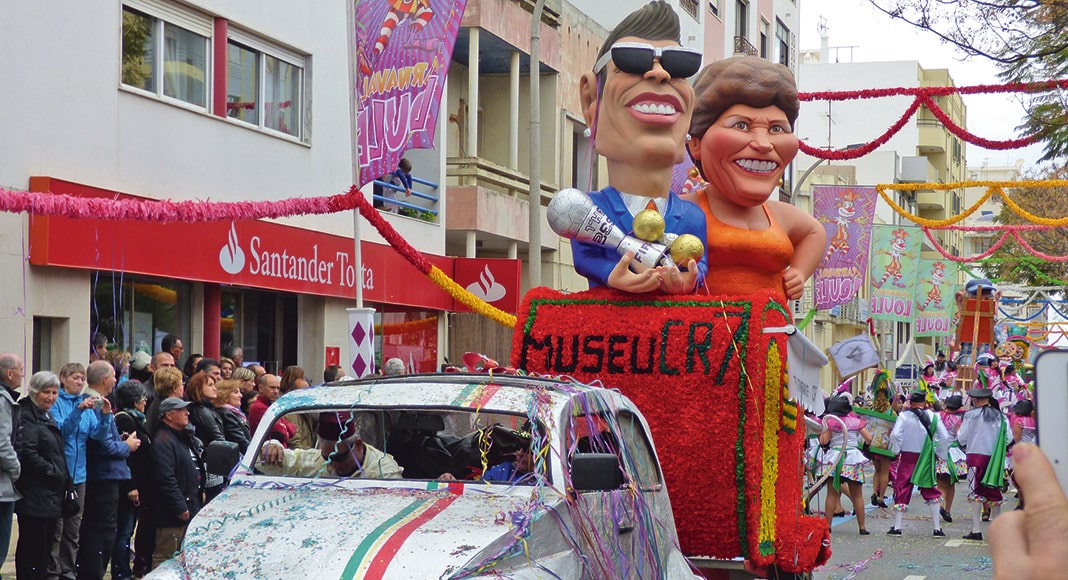 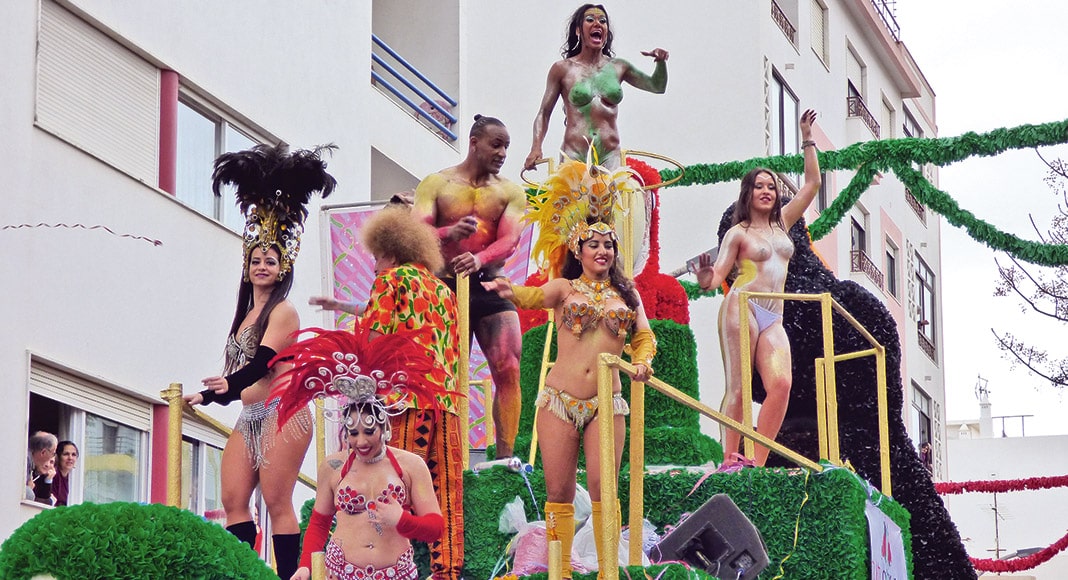