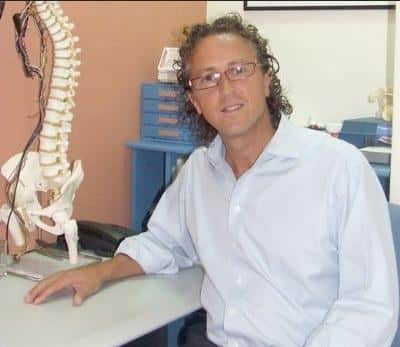 British chiropractor Dr Nick Bach-Price has returned to the Algarve, after selling his practice in the UK, to provide chiropractic care to patients alongside fellow professional Dr Edward Saltys at the Centro Quiroprático Saltys in Lagoa.

Having graduated from the chiropractic college in Bournemouth, UK in 1996, Dr Nick Bach-Price came to the Algarve to work with Dr Saltys for two years before returning to run his own practice in the UK.

With around 15 years of professional experience, Dr Bach-Price is a firm believer of the simple philosophy of keeping the body’s nervous system in good working order allowing it to work at optimum performance. “The body absorbs a lot of stress throughout life as well as taking on knocks and tumbles over the years which come out as symptoms in the body such as lower back pain,” he said. “Here at the practice, we take this tension away.”

A typical first consultation normally lasts an hour and involves an interview where patients discuss their full medical history and the symptoms being suffered before the chiropractor carries out a full neurological and orthopaedic exam prior to creating a tailored plan of treatments.

Nick also carries out gentle cranial work on newborn babies to relieve tension in the nervous system with symptoms that include colic and excess crying as well as on older people who suffer with jaw problems and eye distortion, among other symptoms.

For more information, please visit the Centro Quiroprático Saltys at n.1 Largo do Município in Lagoa or telephone 282 341 004 between 9am and 8pm. Alternatively, email nickbp@hotmail.co.uk