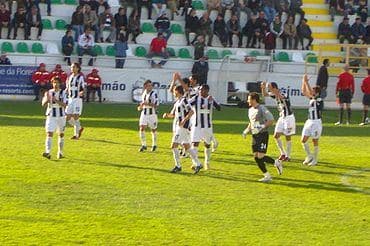 Faro || Last Sunday afternoon’s first Algarve derby of the season between Farense and Portimonense was overshadowed by heavy-handed policing prior to the real action getting underway inside the São Luís stadium.
Traveling fans hoping for a fun day out arriving by coach from Portimão were subjected to stringent security measures by local PSP officers reminiscent of the kind of treatment meted out to Gibraltar supporters during the Euro ‘2016 qualifier against Poland at the Stadium of the Algarve earlier this month.
Although the most recent second division fixture attracted a weekend-high crowd of 1,500 spectators, that number bears no relation to the numbers usually attending top tier matches.
Yet the tiny minority contingent of visiting Portimonense fans, largely made up of middle-aged couples, were perceived to be enough of a ‘threat’ by law enforcement to warrant a police escort into the region’s capital right up to the away entrance at the ground.
Having arrived in good time, any hopes of a convivial pre-match drink at a local café were then quickly dashed as officers refused to allow the group to leave their vehicle. Eventually permission to disembark was granted as long as the by-now weary travelers exited in twos and threes, and only under the condition that all club badges and scarves were removed.
Matters did not improve at the turnstiles with body searches extending to the minute examination of an offending sandwich purchased outside the stadium. A disappointing trip got even worse once the ball actually started rolling.
Portimonense failed to convert first-half domination into goals, misses from Fabricio and Mauricio, who saw one effort disallowed for off-side, were punished after the interval when Neca successfully converted a 71st-minute penalty for the only goal of the encounter.
The 1-0 defeat means that Portimonense’s 36-year wait for a win in Faro continues for at least another season, although fans will think twice about making the journey again.
Next up is a return to the more familiar surroundings of home with a Portuguese FA Cup first round tie versus Real FC on Sunday afternoon followed by a league match against Porto B on Wednesday – both games are scheduled to kick off at 4pm.
By Skip Bandele