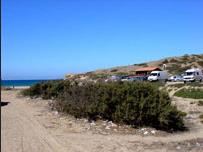 ILLEGAL CAMPING and littering by tourists along the western Algarve coastline, the Costa Vicentina, are damaging the natural landscape, according to the owner of a local surf school.

The coastline, which is classified as a national park, is known to be one of the best areas for surfing in Europe and its secluded beaches provide good conditions for learning the sport.

Surf instructor Dago Lipke, who has owned a surf school in the Algarve for around 15 years and is

campaigning to stop the illegal camping along the western coast, told The Resident about the growing problem.

“Around six years ago, the beaches suddenly became overcrowded with tents and caravans packed together in the car parks near the beaches and on the beaches themselves, leaving rubbish and used toilet paper all over the floor.”

As well as littering, many of the tourists who camp along the beaches also surf and occupy the waves, making it difficult for the local surf schools to find places to teach.

“We often have to rescue people who put themselves in danger because they do not know how to surf and break the rules of surfing etiquette,” said Dago.

To protect their livelihoods and the beaches, a number of local surf schools formed an Algarve surf association, the Associação de Escolas de Surf da Costa Vicentina, in 2001 and members now carry out regular beach cleaning operations before the peak bathing season.

“In 2004, I visited several businesses in the area, including hotels and resorts, who all signed a petition which I sent to the Ministry of the Environment, among others, but unfortunately I either receive no response or I am told that nothing can really be done,” said the surf instructor.

A spokesman for Vila do Bispo GNR told The Resident: “We have great difficulty in patrolling the entire coastline and the law is quite vague for people who have caravans because they are permitted to park in a spot until midnight.”

He added: “We mostly inform people that they cannot camp overnight at the beaches and advise them to move to a designated campsite.”

He also said that wild campers with tents are the worst offenders, especially during the summer months, but that these are difficult to catch and those who leave litter behind are also not fined because the GNR do not catch them in the act.

“Many take their rubbish with them and put it into bins, but those who dump it do so when they leave, so they are very difficult to catch,” he said.

There are around 15 legal camp sites across the Algarve region, from Monte Gordo in Castro Marim to São Miguel in Aljezur, each with a minimum of 150 pitches and some with more than 1,000 pitches.

The Resident tried to speak to the Federação de Campismo e Montanhismo de Portugal, the national camping and mountaineering federation, but, at the time of going to press, no-one had been made available to comment.