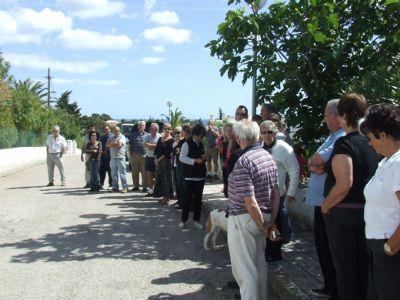 Lagoa Câmara has responded to pressure by foreign residents over the erection of an illegal communications mast in the residential area of Areias dos Moinhos (ADM), Carvoeiro.

Mayor Dr. José Inácio told the Algarve Resident that although the chosen location wasn’t the responsibility of the Câmara, he wishes that the emergency and security forces communications network (SIRESP) had chosen a different site.

Lagoa Councillor and member of the opposition PS party, Hugo da Silva, said: “During a Câmara meeting yesterday afternoon (Tuesday), the issue was discussed and the decision was made that the work on the mast had to stop because it was breaching land boundary legislation.”

Dr José Inácio went on to say that he was not aware that alternative sites were being considered, but that the plot in ADM was still viable as long as the work was within the boundary laws, which prohibit the building of the mast within five metres of any property.

On the same day, more than 50 residents carried out a protest in ADM, putting up banners and posters while shouting anti-government slogans and challenging the foundations of the Portuguese democracy.

The demonstration, which attracted members of the national and regional press, was sparked by the imminent erection of the communications mast without prior notice being given to the residents.

Canadian resident, Hal Jones led the protest and made a speech outside his house, to the assembled crowd of predominantly foreign residents.

“This case makes a mockery of democracy.  No official word has been given and the only response we have had to our case is from the Algarve Resident,” Hal said.

Mike Etwell owns a property opposite the site where the mast is being erected. He said: “I arrived this afternoon for a 10-day holiday and knew nothing about this.”

Lagoa Mayor told the Algarve Resident that “the Câmara does not have to inform residents about everything that it does.”

German resident Dr Tilo Kester, who formerly worked for NATO on radars, said: “This is a scandal. We need to know details about what frequencies this mast will be operating with.”

Dr. José Inácio said that the national communications authority ANACOM and SIRESP had both accessed the site and the mast for possible health risks and concluded that it respected existing legislation.

Hal and his wife Maureen started a petition to stop the mast from being erected in ADM and on April 2 submitted it to Lagoa Câmara. A revised petition had by Tuesday already collected around 200 signatures and this one will also be submitted to Lagoa Câmara.

Also, in a letter addressed to Portugal’s Secretary of State for Tourism, Bernardo Trindade, Susan Joyce, the director of Carvoeiro villa letting agency, Algarve Villa Owners, asks that he looks at “this dreadful situation as a matter of urgency”. She added: “No one has been consulted and nothing posted in the newspapers.”

Lagoa Mayor was insistent that he should not be held responsible for this situation and advises residents to focus their protests towards SIRESP.