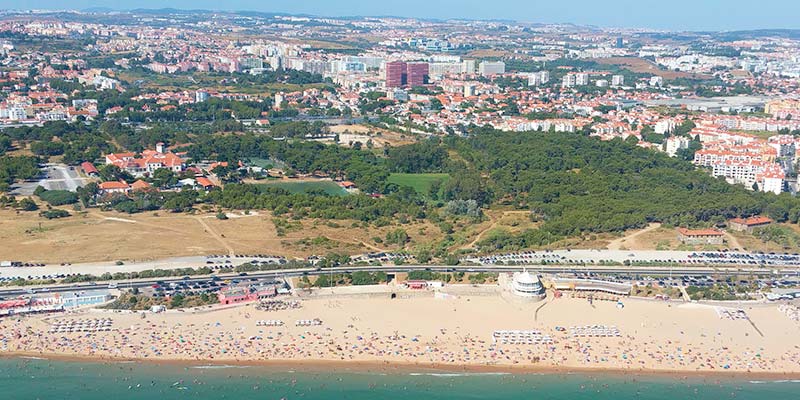 It’s the last strip of green on a coastline dominated by concrete, and residents are desperate to save it.

Emotive clips on “SOS Quinta dos Ingleses” show the full splendour of the green ‘lung’ between the sea and outer Lisbon’s urban sprawl, echoing with the sounds of birdsong.

“Our grandchildren may never know Quinta dos Ingleses”, says the text, as the site is destined to be transformed by a plan that involves over 900 homes, shops and hotels.

Say campaigners, development will go on for the next 20 years, when what local people want is to keep things the way they are – better still to start valuing Quinta dos Ingleses for the beautiful open space that it is.

Thus this Sunday, April 7, will see a ‘human chain event’ on the site to which everyone who cares about these kinds of threatened environments is welcome.

Ironically, the developers of the site include iconic ‘English school’ St Julian’s which is teamed up with construction company Alves Ribeiro.

The project was passed by Cascais borough council in 2014 by a slim majority with objections then citing the negative effect on “the quality of life for local residents, increased potential risks such as local flooding, and lack of open space”.

There were concerns too for the environmental impact on Carcavelos beach, possible erosion of sand and whether the new construction “would affect wind intensity and damage some of world’s best surfing”, wrote AngloInfo website at the time.

Two reports on environmental impact were compiled in “a bid to allay fears” and mayor Carlos Carreiras guaranteed the project would continue “to be subject to close and careful scrutiny”.

Earlier this year, an appeal by campaigners to parliament saw MPs say they have no competence to block the plan – the only veto can come from the very council that approved it.

Says Público, developers have until September 2022 to start work.

Thus Saturday’s stand could be crucial in drawing attention to the issue before it’s finally too late.

Over 7000 people have already signed a petition to save Quinta dos Ingleses, and there have been numerous protests and appeals.

For a guide to this environmental fight, (click here).

Meantime, the ‘tree-hugging’ initiative (yes, they really say they want to hug the trees!) starts at 10.30am.