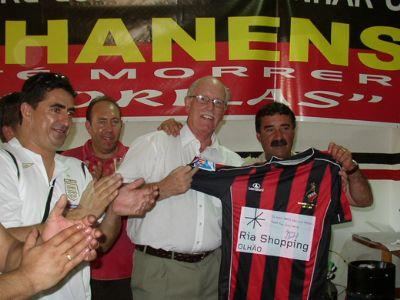 It is a race against time as earth movers and diggers work around the clock to get the ground ready for the start of Olhanense’s first game back in the Premier League after 34 years.

Off the field, life is no less frenetic. Jorge Costa has only half a squad but the first signing of the summer, defender Carlos Fernandes from Marítimo, will bring experience to the side. The 31-year old, who started his career at local side Farense, has played for Belenenses, Boavista and Sp. Braga.

Captain Rui Duarte has also signed a new two-year contract and negotiations are still on going with a number of loan signings, mainly from FC Porto.

Last weekend, a party was held at the stadium and recently re-elected President, Isidoro Sousa presented a signed commemorative Champions Shirt, used only for the last game of the season, to the British supporters who now number more than 60.

He went on to thank the Algarve Resident for its support and exposure during the season.

Supporters wishing to apply for membership should do so as soon as possible. There are now more than 5,000 socio-members.

The league fixtures are announced on July 6 and, 10 days later, the prestigious Guadiana Tournament takes place at the Municipal Stadium in Vila Real Santo António.