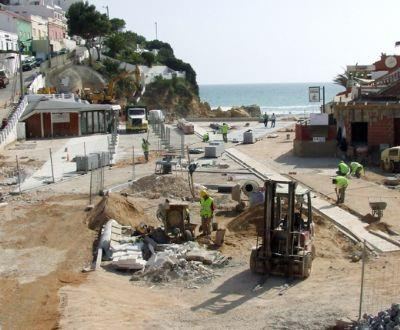 More than 30 business owners in Carvoeiro have signed a petition to stop the road works in the town from progressing any further until the end of the summer season.

Dutch Resident and petition initiator Robert Sanders told the Algarve Resident: “I have been watching the road works as they progress near my jewellery shop. With only two or three workmen each day, I can see that the work will be delayed, so two weeks ago I decided to speak to other business owners and start a petition, which has been given to the Câmara.”

The petition asks Lagoa Câmara to finish the works along Rua dos Pescadores then stop, allowing tourism and trade to resume unaffected during the summer months, with the remaining work to continue in the autumn.

António Lopes, owner of clothes shop Casa Tilinha, established in the village since 1940, signed the petition: “In all the years the shop has been open, we have never had such a drop in business. I would say by 50 per cent. We are despairing. This is a double crisis for us – the global economic crisis plus our own Carvoeiro crisis.”

Geraldine Wilkinson from Smilers bar said: “I signed the petition because it looks like the work here will continue into the summer months and although I am sure that it will be beautiful in the end, this is not the best year for us to lose trade.

“Although I want the Câmara to stop the works until after the summer, my husband believes that it is better that the works continue so that it is out of the way. It is an issue that has divided us.”

Rui Correia, Vice-President of Lagoa Câmara, told the Algarve Resident: “We are analysing the petition but have not reached a decision.”

He added that there are now more workers in Carvoeiro because the Câmara is aware that the work needs to progress and that it is affecting business owners in the village.

Meanwhile, foreign residents in Carvoeiro have complained because of an electricity generator that was placed on the cliff near the GNR station earlier this month to generate power for the construction of the new public toilets on the beach.

A spokesman from Administração Interreal, which manages properties, said: “They were worried that the vibrations would cause a rock fall from the cliff and the smell of it was awful, so I complained to the Câmara and the building contractor on site about it but nothing was done.”

She added: “On Sunday night, one of the residents was so sick of the generator that at around 9.30pm they cut through the pipes and tubing that kept it running and threw them off the cliff.”

Rui Correia said that the generator was likely to be removed tomorrow (Saturday) when the regional development commission (CCDR), responsible for the work on the beach, is expected to finish. He also added that work on the square is expected to be finished on April 9.