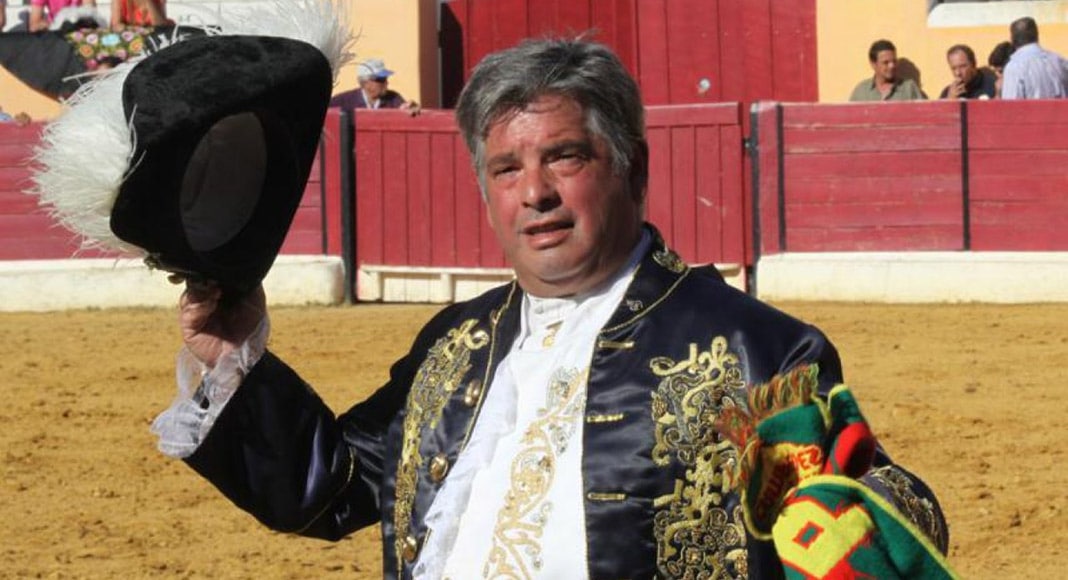 A reportedly world-famous bullfighting horseman (picador) is facing a possible two-year jail term after 18 skeletal greyhounds were discovered in squalid conditions at his farm property in Monforte, Portalegre.

The story rapidly ‘went viral’ over social media, with even GNR police sharing pitiful images of the dying dogs – the weakest of which were transported to various dog shelters, where most are now making a slow recovery.

On the night the 59-year-old ‘legend’ in his bloodsport was formally indicted for animal abuse, he told bullfighting blog ‘O Farpas’ that the story was being blown out of all proportion.

“I have given my statement and am back home tranquil and with a clear conscience”, he said. “I did not kill anyone. I did not steal from anyone. I have not treated my animals badly. Some were thin, but I did not treat them badly”.

His protestations added fat to the gathering fire.

The national federation of greyhound breeders (FNG) was quick to point out that Moura’s dogs are Spanish greyhounds and thus not bound by regulations in Portugal which relate only to English greyhounds.

FNG president Jorge Bouça-Nova told Diário de Notícias his federation is “flabbergasted” by the case. “It’s unpardonable to reach the point at which this man left his animals”, he said.

But much more relevant perhaps has been the national outcry, orchestrated in a large part by animal protection organisations, particularly those looking after the rescued 18.

What few people seem to be aware of is that 23 greyhounds have been left behind at the farm.

GNR police and municipal vets deemed their conditions not severe enough for ‘enforced removal’ – but that doesn’t mean they are living in any kind of luxury.

Says DN, their care is now being overseen by the authorities as the association ANIMAL has called for a thorough check on the well-being of every animal on the property, cattle included.

A voluntary body that specifically rescues Spanish greyhounds has in the meantime stressed that this case is only one of ‘many’.

Katefriends.com wrote over social media: “There are more João Mouras than anyone can imagine” – because hare coursing using Spanish greyhounds is still allowed “due to economic and political interests connected to the lobby and in spite of denouncements” made by people who witness situations of cruelty and mistreatment.

The petition’s text explains that although by law animals are no longer considered objects in Portugal, greyhounds and ‘galgos’ continue to be treated as objects “for betting, leading them to be used and abused and then discarded”.

The petition is directed at the President of Portugal, parliament and the prime minister and has already amassed almost 24,000 signatures (click here).

Meantime, the traumatised animals removed from João Moura’s farm have all been checked, de-wormed, microchipped, tested for diseases and are slowly being nursed back to full health.

All of them were anaemic, some registered positive for Leishmaniasis, heartworm and tick fever, some are understandably timid, others more bold and ready for a future in which shelter staff hope they will find caring, patient adopters.

As Sol stressed on Monday “the outcry about bullfighter João Moura is far from over” – not least because abuse at his farm appears to go back years.

Said the disturbing post from Chris Gonçalo, she rescued ‘completely anorexic’ lactating mothers and pups from the farm ‘many, many years ago’.

The story highlighted by national media this week appears to have resulted from greyhounds escaping from the property and being found on local roads. Safety concerns led GNR police to returning the dogs back to Moura’s farm, where they were confronted by the disgusting conditions that have since been widely publicised.