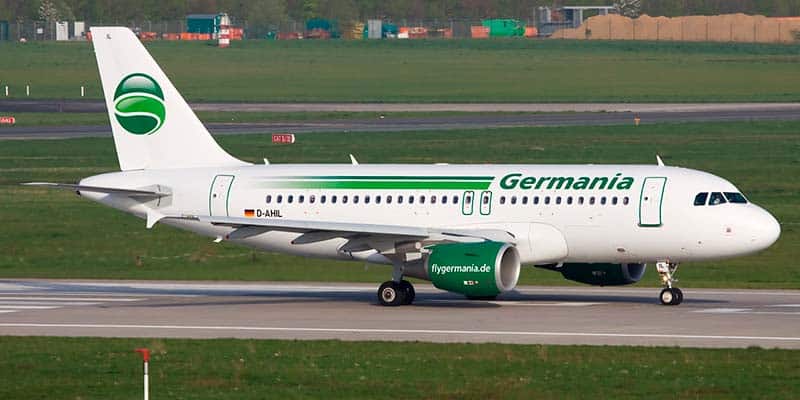 Hidden within the small print of the announcement on Tuesday that low-cost airline Germania has filed for insolvency is the stark reality that passengers who have made ‘direct bookings’ with the company “are not entitled to replacement flights”.

For now, the extent of human misery caused by this latest blow to the German aviation industry is being quite literally ‘left in the air’.

Say reports outlining the causes of Berlin-based Germania’s collapse, its planes transported more than four million passengers per year – many thousands of which will have been coming to Portugal.

This is the second large carrier collapse to hit the German sector (Air Berlin stopped flying in 2017) and yet another casualty in a bigger picture that looks certain to include others.

Says the BBC, “last week Norwegian Air announced that it wants to raise £268 through a rights issue to improve its finances. Other airlines like Wow and Flybe are looking for buyers”.

In the same context even Ryanair has posted major losses for the first time in years (a dip of €19.6 million for the last three months of 2018)

Here, Algarve tourism boss José Fernandes admits this is just more bad news for a sector that is already holding its breath, “especially as Germany is one of the principal traditional markets for the Algarve”.

“This collapse implies the loss of four routes to Faro which will affect around 25,000 tourists, translating into an eventual reduction of passengers from that market of around five per cent”, he told Journal Barlavento.

Very much like the issues that brought down Monarch in 2017 – hammering low-season bookings in the Algarve – Germania’s Holy Grail has been put down to rising fuel prices and currency fluctuations.

Karsten Balke, the company’s CEO said: “Unfortunately, we were ultimately unable to bring our financing efforts to cover a short-term liquidity need to a positive conclusion. We very much regret that consequently, our only option was to file for insolvency. It is of course the impact that this step will have on our employees that we regret the most. All of them as a team always did their best to secure reliable and stable flight operations – even in the stressful weeks behind us. I would like to thank all of them from the bottom of my heart. I apologise to our passengers who now cannot take their Germania flight as planned.”

As reports across the board stress, it is too early yet to see how many passengers have been affected.

Chinks of good news are that customers who booked flights as part of a holiday package will be able to arrange alternative transport through their operator, while Lufthansa – Germany’s largest carrier – has announced that it will offer Germania victims discounted tickets until the end of the month.

Germania had been operating since 1987 and even two years ago was talking about expansion with the purchase of 25 Airbus jets.

Looking at the ‘bigger picture’, the Financial Times suggests Germania’s fall – very much like that of Air Berlin and Monarch – came in trying to ‘reinvent itself’ at the wrong time.

The price of a barrel of jet fuel peaked at $86 US dollars last October “having been on the rise since early 2016 when it was below $30”.