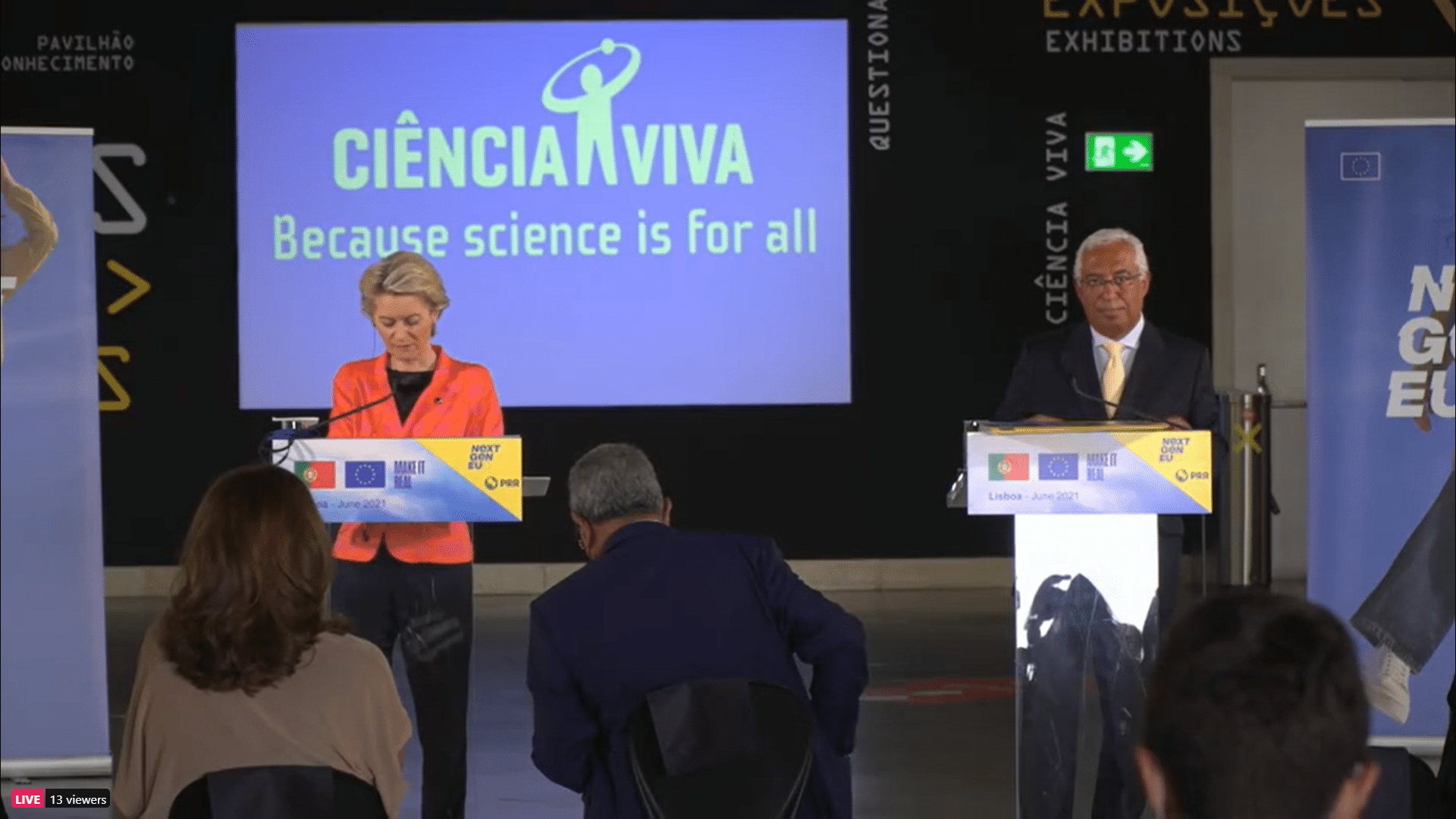 European Commissioner Ursula Von der Leyen is on a whistle-stop tour of the Iberian Peninsula today, officially approving the two countries’ Plans for Recovery and Resilience – which pave the way for the longed-awaited ‘cash bazooka’ of billions in grant funding.

In Lisbon first, she ensured that Portugal was the first Member State to see its PRR given the green-light.

This was a definite ‘public relations’ moment. Said Diário de Notícias, “in the technical reasoning presented to the community executive and which served as the basis for the decision, the Commission had a very positive assessment of (Portugal’s) PRR. There are three aspects in which the national plan deserves “top marks”: “mechanisms of control” (of fraud and corruption), capacity to increase the country’s potential and digital transition.

Beyond these classifications, Brussels “praised various aspects of the Portuguese PRR, considering it ‘ambitious and robust’. In the understanding of the executive lead by Ursula von der Leyen, the plan reveals “a consistent strategic vision”; includes an “ambitious package of reforms and investments” and contains reforms that “eliminate institutional bottlenecks and foment competition”.

Smiles all round, in other words, as the leader of the European Commission then set off for Spain where she will be saying much the same thing all over again.

A rather different version of the situation has been given by popular tabloid Correio da Manhã, which recalls that the CIP (confederation of Portuguese industries) is lukewarm (at best) over what the ‘cash bazooka’ will actually mean to those that need it most.

To say the CIP is less than optimistic is to put it mildly.

Dinheiro Vivo reported on Monday that half Portuguese companies estimate the PRR will have little or no impact on their economic activity.

According to a study commissioned by the CIP, only 14% “forecast it will have some significance”, while 66% of companies explained they hadn’t even been able to access government support through the pandemic because they didn’t qualify.

This has been a common complaint throughout the sanitary crisis: what authorities announce, and what actually happens appear to be two different things.

Thus, aside from the political promotion, the reality of what the PRR will mean for Portugal is still unclear – beyond the fact that it promises €17 billion in grant funding for projects already identified.

According to CM, “various entities” in Portugal – among them the general inspectorate of taxes, the accounts court and the agency for development and cohesion – “consider it absolutely essential that an interactive platform is created giving comparable data that allows for identification of final beneficiaries , as well as the names of contractors and sub-contractors”.

This is a demand set out in Article 22 of the rules for the Mechanism of Recovery and Resilience, approved by the European Parliament and European Council, says the paper.

But this far, there is no such platform.

Another “preoccupation” is the lack of names to be involved in the “Recover Portugal” mission which will “handle the money of the bazooka”, says CM.

“For the time being, only two names are known: those of (the mission’s) president Fernando Alfaiate and the president of the commission accompanying the funds, António Costa e Silva, the man who helped the government draw up the PRR”.

Suspicions of corruption are never far from the Portuguese psyche, and according to the latest Global Barometer on Corruption compiled by Transparency International (TI), 41% of Portuguese believe it has increased since the advent of the pandemic, while 63% think the government is led by “certain private interests”.