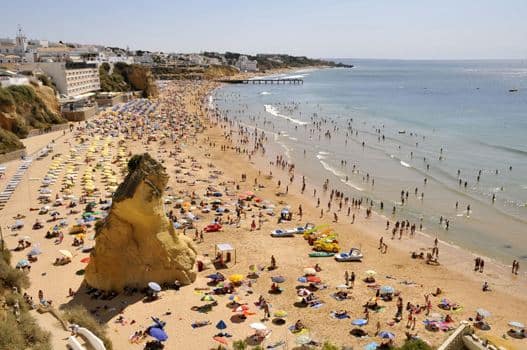 UK national tabloid the Express is running with a story today suggesting Brits are “panic buying holidays to Spain and Portugal” fearing nowhere else is safe.

In the wake of escalating terror attacks in holiday destinations like Tunisia, Egypt, Indonesia, Turkey and Morocco – and faced with popular Greek ‘holiday islands’ being overrun by Syrian migrants – travel giant Thomas Cook has told the paper that it is seeing lots of people opting for the Spanish mainland, Spanish islands and Portugal.

And with the demand for holidays suddenly spiralling, prices too are set to soar.

It is all due to the fact that Brits consider Portugal and Spain ‘safe from ISIS attacks’, claims the paper.

Portugal’s terror threat level has remained unchanged since atrocities in France last November – even though SEF border control agency has said the country is “seriously exposed” to the threat of terrorism (see: http://portugalresident.com/portugal%E2%80%99s-borders-not-safe-says-sef).

But in the icy grip of the British winter, punters are very possibly not taking SEF’s warnings to heart. They may not have even heard about them.

One aspect that could change the picture would be the opening up of the proposed ferry link between Portimão and Tangier, Morocco.

Last November, Sulinformação website suggested a Moroccan shipping company was “very interested” in part-financing the link, as long as it could find an equal partner in Portugal.

Talks have been instigated with Faro council which has been twinned with Tangier since 1985, said the news service, and is most keen to see a ferry service established.

It was a story that has already prompted widespread rumours – not to mention fears – among British expats living in the Algarve.

A source for the expat residents organisation AFPOP said he hoped the idea would be “seriously looked at with regard to terrorist transportation links”, if it showed signs of going ahead.

For now, this seems unlikely. According to Sulinformação, the company pushing for the link doesn’t expect any developments for at least 18 months to two years, and there is still no hint of a Portugal-based entity ready to co-finance the project.