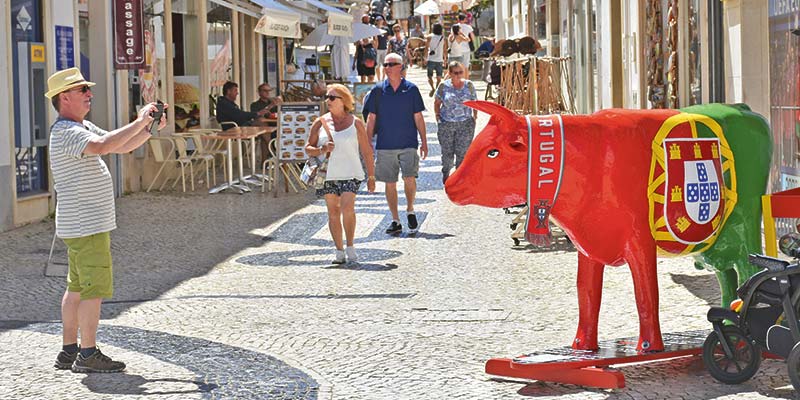 Not even the constant uncertainty surrounding Brexit is keeping Brits away from the Algarve. After a short slowdown following the 2016 referendum, the British market has slowly but steadily recovered. The number of overnight stays by British holidaymakers in the region between January and August has grown 2.1% compared to the same period in 2018, while a new study has shown that Brits are the main buyers of houses in Algarve resorts.

It’s the kind of news that proves that the bond between the Algarve and the British is too strong to be broken by the UK’s imminent departure from the EU.

Algarve tourism boss João Fernandes spoke to the Resident about the “historical and privileged relationship” that the UK and Portugal share and the particularly special link between Brits and the Algarve which has helped minimise and, in many cases, overcome the possible effects of Brexit.

“This is partly one of the reasons that explain the growth of the British market in the Algarve, which contradicted some of the earlier forecasts,” Fernandes told us.

“The UK continues to be the main tourist market for the Algarve but that’s because the region didn’t simply stand by and watch events unfold.

“We were aware of the possible risks that Brexit could have on the Algarve and we have been implementing a series of measures that aim to minimise the impact of a possible reduction in the number of British tourists, which, so far, has not happened,” he said.

Fernandes highlights the creation of a “product and market plan” that aims to keep the Algarve at the “top of the mind” of British holidaymakers when they are deciding where to go on holiday.

Algarve tourism authorities have also “invested in the creation of joint campaigns with tour operators and airlines in a bid to create new opportunities to visit the region all year round”, and Fernandes says that the results have been positive so far.

The regional tourism chief also told us about the Algarve’s contribution to the national ‘Brexit Contingency Plan’ which was presented by the government and which ensures that Brits maintain the same travelling rights they currently have, as well as the region’s participation in the ‘#Brelcome – Portugal will never leave you’ campaign which aims to show British travellers that they “will always be welcome in our country”.

Fernandes also stressed the “fundamental contribution of the British resident community in the Algarve”, which accounts for around 15,000 of the Algarve’s 430,000 resident population.

“Brits who chose the Algarve to live have become true ambassadors of the quality that the Algarve destination represents,” said the president of the Algarve Tourism Association (ATA), explaining that they encourage family and friends to visit the region as well.

On a closing note, João Fernandes told us that all these efforts seem to have paid off.

Latest data shows that the Algarve has seen the number of overnight stays by British holidaymakers reach the 4.1 million mark between January and August this year, a 2.1% year-on-year increase.

As we went to press, the Algarve hoteliers’ association (AHETA) revealed that the number of Brits staying at Algarve hotels increased 7.2% in October compared to the same month last year, another sign that the British market continues to grow in the region.

The Resident also contacted Michael Reeve, CEO of foreign residents’ association afpop, who confirmed that “from all sources that we have, it seems that apart from a short slowdown immediately after the referendum in 2016, British citizens are still looking to move abroad and are still choosing Portugal as a place to live.

“It does seem that people are looking further afield than the Algarve in recent years,” he said, based on the response at the PUKCC ‘Moving to Portugal’ event in London earlier this year, where “over 700 people in one day came to hear about Portugal”.

“When asked, almost all of those in the seminars were at some stage of a plan to leave the UK, and whilst the Algarve still was the destination with most interest, significant numbers of those attending were looking at the Silver Coast, Cascais and even more rural areas of Portugal. It’s also worth noting that these were not all people looking to retire. There were many younger people with families looking at starting a new life in Portugal and bringing families,” added Reeve.

Further ‘Moving to Portugal’ events are taking place this month in the UK – on November 12 in London and on November 14 in Manchester.

The afpop CEO also praised the Portuguese government for “calming the waters” after the widespread concern that followed the referendum.

“The concern and confusion lasted for quite a while, not helped at all by scaremongering in the British media or the political squabbling that followed.

“However, the Portuguese government has gone a long way towards calming the waters and should take a lot of credit for actually getting to grips with the situation and taking steps to ensure that those British citizens who are here will be able to stay and those who want to move here will be able to do so,” Reeve added.