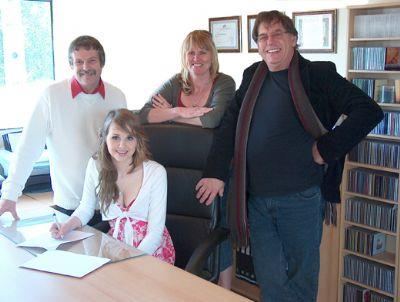 When Norfolk teenager Daisy Allington came to the Algarve to meet up with a school friend, little did she know she would leave a recording star.

Daisy travelled to the Algarve with her family at Christmas and met Trevor Holman, co-founder of the newly launched record label ARC (Algarve Record Company), through her friends.

Trevor Holman told the Algarve Resident: “We had some time to kill, so I asked Daisy if she would like to record a song in my studio while we waited.  She said yes, so we recorded a simple version of the Lenard Cohen track Hallelujah and the Beatles classic Let it Be.”

He continued: “I gave Daisy the CD with the two songs as a sort of souvenir, then thought nothing more about it. It was only when Derek Ash and I were composing songs for a show we were writing, Churchill – The Musical, and we needed a voice for Anne Frank that I thought back to Daisy.

“In the show the song, That’s What I Believe, is sung by Anne Frank, but everyone that has heard the song feels it is extremely relevant for today’s world,” said Derek Ash of ARC.

Fifteen year old Daisy flew back to the Algarve to record the single and also became the first artist on the new record label with her debut single, That’s What I Believe, being released by ARC.

“We were just forming the new company and we thought it would be great if we signed Daisy to the label,” said Trevor Holman.

“It is not only exciting for Daisy, it’s exciting for us to have such a talented young lady signed to the record company.  We are all sure she has a really great future ahead of her,” he added.

The new record company is British registered but will be signing artists, recording, producing and handling distribution from the Algarve.

“I have had Retiro Recording Studios for the past six years and had stars such as Sir Cliff Richard recording here,” said Trevor, who has teamed with Derek Ash and Sarah Ewing in the UK to form the company and hopes that the interest surrounding Daisy will be just the start of things to come for the label.

“Daisy’s song is being played here on Algarve FM and is also being championed by BBC Radio Norfolk in the UK. We have already had very positive feedback from listeners as far afield as Australia, and are working with the Anne Frank museum in Holland to organise distribution from the gift shop there also.”

That’s What I Believe will be available to buy or download within the next month.

For further information about the single or ARC please contact Trevor Holman by calling 917 010 189 or email trevor.holman@live.co.uk.