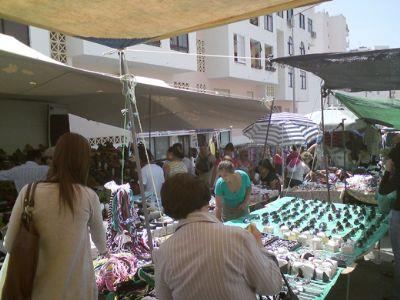 British residents in Quarteira have lodged complaints about problems caused by illegal gypsy market stall holders every Wednesday, and the lack of response from the authorities to their complaints.

One British resident, who asked not to be named, said: “The problems at the market have been getting steadily worse for four years. There are now around 600 stalls, only 150 of which are legal.” The resident added: “Local businesses now close all day when the market is on because the illegal stall holders cause so much trouble. I have personally seen them selling cannabis and illegal counterfeit products.”

A local business owner, who also asked not to be named, said: “The illegal stall holders park in front of businesses and disabled people who have apartments here are trapped while the market is on.” Other problems described by residents include damage to the roads and footpaths, illegal parking, intimidation, blocked access to businesses and the medical centre, and littering, among others.  “Some of the gypsy women from the illegal stalls change their children’s nappies and throw these on the floor as well as defecating in doorways and on the footpath,” said one British resident.

The residents have contacted the GNR and the local parish council to complain and ask what can be done to remedy the situation. “We were told by the GNR ‘Oh, it’s just Wednesdays, we can’t do anything about it’,” said one resident.

José Mendes, President of Quarteira parish council, told the Algarve Resident: “The market is one of my big worries and I can fully understand and agree with the complaints of local residents.” He added: “We are working on a solution for the market, which is to move it to another site, but that will not happen until after the summer.” José Mendes said that he is aware of the clandestine stall holders and their illegal activities but the GNR are unable to combat this crime while the market is in open streets without a boundary or allocated stalls.

“We have lost the war, but we are going to start another war,” he said. “Despite a petition we have received not to move the market, it will be moved and those who are unlicensed will not be allowed to enter the space.”

According to José Mendes, the problems at the market are giving Quarteira a bad reputation, which he says will end once the new market is installed.

A spokesman from the GNR told the Algarve Resident: “We have no evidence of drugs being sold at the market, but there are many cases of counterfeit goods being sold.” He added: “We try to combat this type of crime with raids almost every week.”