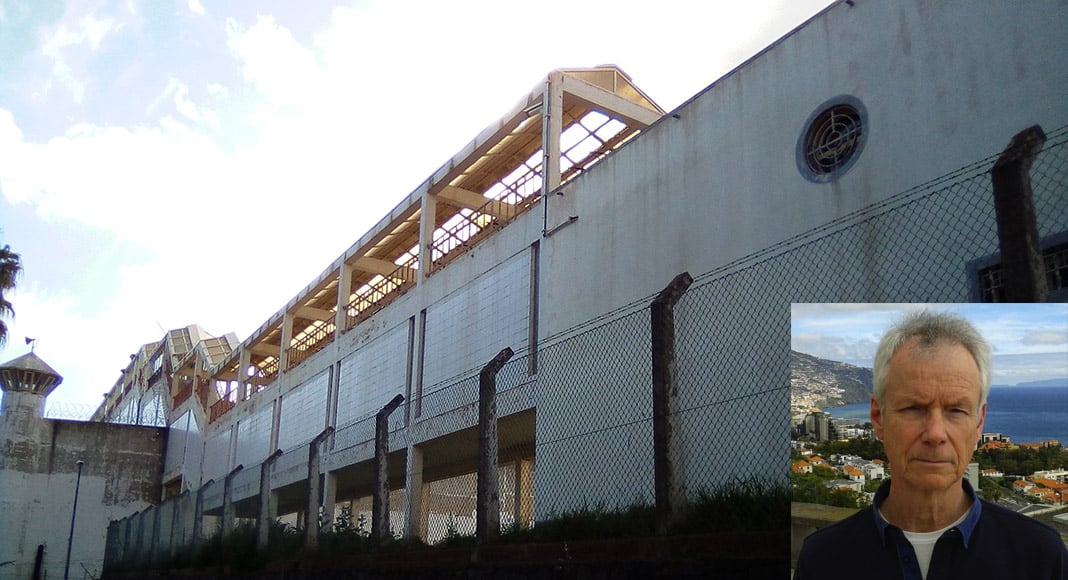 British pensioner Trevor Kitchen may never fully recover from the inhumane, degrading treatment he says he received at the hands of Madeira’s judicial police and prison guards during 48-hours in which he was incarcerated in a maximum security prison on the ‘paradise’ island of Madeira.

The 70-year-old – a whistleblower in a major currency scandal that saw banks throughout the world investigated for manipulating exchange rates – is yet another victim of antiquated laws that consider defamation a serious crime.

His charges – for allegedly defaming the personal honour of a Swiss banker and lawyer in a few angry emails – were utterly spurious (see below).

But authorities in Switzerland appear to have pulled out all the stops to ensure the 70-year-old financial service provider was given the most harrowing experience possible.

He believes Switzerland’s pursuit for criminal defamation all stems from the fact that in 2011/ 2012, while living in Switzerland, he blew the whistle on banks that were manipulating major currencies resulting in everyday citizens being ‘ripped off’ in what amounted to billions of dollars/ pounds Sterling/ euros.

Mr Kitchen’s detailed analysis of how trading companies and banks rigged the financial system eventually forced the banks themselves to conduct internal investigations which slowly but surely led to ‘successful enforcement actions and the recovery of billions in fines’ for financial regulators across the globe.

This part of the story can be read here in an article by former FBI agent and whistleblower Jane Turner (click here).

But for the 70-year-old British national, the real nightmare began one achingly cold January morning in Madeira when PJ police turned up at his apartment door with an international arrest warrant.

Within a few highly-confusing hours, he had been whisked to the island’s maximum security prison in Cancelo, where he was forced to strip naked, wear a pair of clearly-used prison overalls and locked in solitary confinement.

When Trevor tried to suggest alleged defamation did not justify being treated like a dangerous felon, he was told tersely: “Defamation is a serious crime in Portugal. It carries a three-year prison sentence”. In this case, the arrest warrant included further charges (again spurious) for “breach of privacy / secrecy”.

Defamation is also considered a ‘serious crime in Switzerland’ – which is where the plaintiffs lodged their case against him.

Mr Kitchen describes the scene: the cell offers “two old ripped dirty blankets, a smelly sponge pillow and two patched-up old sheets rolled together on a wooden bed base with holes in it for ventilation. A plastic knife, fork, spoon and toilet roll on a single makeshift shelf. A rubber mattress is propped up against the wall, a filthy old sink with only a cold water tap and toilet in the corner with no seat .”

The window pane is cracked. The wind is whistling through it. Concerned about disease, particularly during a pandemic, the pensioner realises his prison overalls are much too tight.

“I think about AIDS, disease and COVID. They made me wear these with no underwear. What kind of people do this to a 70-year-old pensioner?”

A brief meeting with a lawyer who clearly knew very little about the circumstances behind the arrest warrant punctuated what was otherwise a cheerless wait to be taken before a judge.

Trevor recalls one prison guard telling him “ the Swiss organised this, it is they who are doing this to you, not Portugal”

On the second night, he at last got his medication – many hours late. There was no access to bottled water. Not trusting the rickety tap or grimy paper cup, he recalls having to chew his pills.

Day three saw him finally taken to a room to be reunited with his clothes. He was then handcuffed and taken to court, where the judge said it was not his job to consider the case. The arrest had been ordered by the Public Prosecutor in Lisbon, and extradition was to be dealt with from Lisbon.

Mr Kitchen was ‘free to go’ home to the apartment he shared with his wife under TIR rules (meaning he had to remain at his address, and inform the court if he intended to travel anywhere for more than five days).

The day after his release he read an article in the local paper about a 30-year-old man who had resisted arrest and was eventually caught in possession of 23 doses of cocaine. The young man, a local, was sent home within three hours of his detention.

Why was a 70-year-old pensioner with various medical conditions and his own version of the ‘defamation’ story put through the wringer? He still can’t understand it.

The extradition hearing came last month and, fortunately for Mr Kitchen, the bench found it to be groundless.

As he told us beforehand: “There is no justice to be had in Switzerland, this was a perverse abuse of process. My wife and I fear for our lives if we ever go to Switzerland, that’s what needs going in the press…”

The Portuguese public prosecutor however disagreed with the three judges’ decision-making, and lodged an appeal – signing off on 22 pages of arguments with a sentence that sounded almost like an order: “Your excellencies however will do the usual JUSTICE!”

In Lisbon last Wednesday – and to the extreme relief of Mr Kitchen and his wife – a panel of judges dismissed the appeal.

His English lawyer (Toby Cadman) will be campaigning to have Swiss authorities finally remove the European Arrest Warrant from the system. Trevor however doubts that they will.

The most chilling aspect of this case is the ease with which authorities in Switzerland can apparently gain access to people’s bank accounts and remove money for no greater reason than ‘because they can’.

Mr Kitchen tells us he lost £30,000 from his pension account this way.

Swiss whistleblower Rudolph Elmer told the whistleblowers blog before Wednesday’s appeal decision that justice in his country is “basically used to protect the criminal banks and other dubious organisations as well as individuals which use Switzerland not only as a tax haven but also as a legal haven.”

He stressed “if Trevor is extradited to Switzerland he will not face a fair trial at all.”

So to that end, Trevor Kitchen has at least been spared.

This story has not gone into the minutiae of the various arguments: who owed what to whom/ who said what to whom, etc. But Mr Kitchen is planning to file for compensation and damages over the way he was ‘mistreated’ in Madeira.

SEF borders agents actually tried to take him in for questioning AFTER he was released from jail. By then he had a top Portuguese lawyer in Lisbon who told them over the telephone that they had no right. The agents apparently left hurriedly.

The British embassy in Lisbon also supported Mr Kitchen through the Madeira ordeal, passing his mistreatment allegations to the ministry of foreign affairs. An official spokesperson has confirmed the embassy will be “checking on the progress of this complaint”.

For Trevor Kitchen the one beam of light through the last few months has been ‘the Portuguese judicial system’. “I placed my trust in it. In the end, true, honest justice and common sense won”, he told us.

But how is it possible to justify the pursuit of an elderly man who has already been stripped of tens of thousands of pounds for simply blowing the lid on what he believes to be malpractice?

This is where things get even more chilling. Says the financial service provider, “reporting a crime should not be a crime, but in Switzerland it is. Police and prosecutors are ruthless in their quest to get convictions. This is well documented”.

“The failure of this case is proof that Swiss federal law enforcement authorities abused their power in an unjustified personal and political persecution, motivated by revenge. They attempted and failed to pervert the law”.

Had he known how dangerous it is to speak out against injustice in Switzerland, would Trevor have done anything differently?

“I would probably have remained anonymous or simply let corruption thrive”, he concedes. “My wife and I have vowed never to travel anywhere within EU’s “Schengen Wonderland” again, especially Switzerland.

“We will live elsewhere, where people are are not oppressed, abducted, stripped naked, imprisoned and muzzled for expressing their opinions.

“The European convention for the fundamental protection of human rights and fundamental freedoms, states: “Everyone has the right to freedom of expression. This right shall include freedom to hold opinions and to receive and impart information and ideas without interference by public authority and regardless of frontiers.”

“This is in effect a farce. The 27 EU countries and Switzerland deliberately retain archaic defamation criminal laws in order to stifle free speech whenever they want. Now, as the EU push for their “ever closer union”, even the public’s thinking is at risk.

“I sense society is slipping quickly into a globalised authoritarian Superstate.

“My wife and I have been put off the Island and certainly do not trust people in Madeira, nor how the judicial police over-reacted

Another ‘moot point’ centres on how fair authorities are in Madeira. American life coach Margaret Fields has written a fairly harrowing account of her own family’s experience on the stunning island, entitled: “Read this before moving to Madeira” (click here).

She explains: “I’ve learned that this island is small. Be cautious about who you trust. The bloodline is long, and deception is common. People don’t discuss this here. It is discouraged… Negativity surrounding a small place can negatively impact tourism…. Expats are vulnerable, as are locals, to people in the position of power”.

In ‘surreality’ this case recalls another, years ago, involving a British woman who felt she had been treated unfairly by a Portuguese lawyer. She wrote to the solicitors’ regulatory body to register her complaint – and found herself charged with aggravated criminal defamation and threatened with imprisonment.

Very similar to Mr Kitchen’s case, the woman ended up spending a small fortune in defence lawyers – and suffering many months of mental turmoil – before the case was ‘archived’ due to judicial time limits.