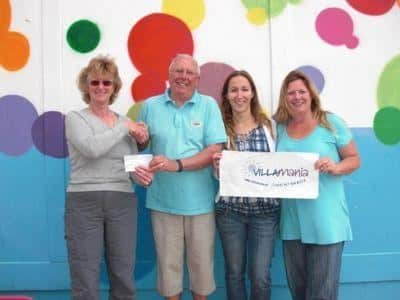 A donation of 2,000 pounds sterling has been given to the Pirilampos children’s home in Albufeira following fund raising efforts by members of the Oxgate Masonic Lodge in Watford, England.

Graham Bedford, 2008 Master of the Oxgate Masonic Lodge, suggested that the children’s home be chosen as the charity of the year after learning about the home and its work through his daughter Kellie Gomes, who has been living in the Algarve for the past 17 years.

“I wanted it to be my charity of the year,” said Graham Bedford.  “This is the first time my Masonic Lodge has sent charity money abroad so I was delighted when they agreed.”

A garden party and a raffle with the top prize of a holiday in the Algarve being donated by Villamania run by Kellie Gomes, helped to raise the final charity fund total.

Graham Bedford travelled to the Algarve last month to present the cheque to Peta Birch from the Pirilamos home.