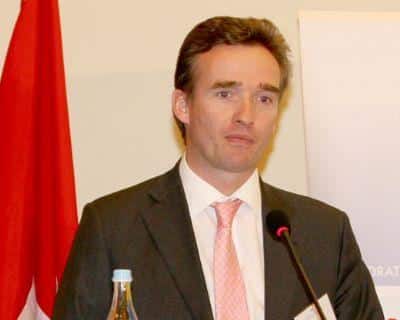 British Ambassador Alex Ellis shed some personal light on the Portuguese and the British in Portugal in an interview with Rádio Clube Português.

The ambassador said that he did detect a feeling of ‘crisisophilia’ among the Portuguese, who had a tendency to see “the cup half empty rather than half full”.

When told that the Portuguese were generally used to crises in the economy, he said that, like the story of the man crying wolf too many times, talking down the economy and speaking of crisis could become a self-fulfilling prophesy.

“I’m not saying that things aren’t difficult. Obviously, if someone has lost their job then that is a crisis,” he said. “But I do think that the Portuguese show an amazing resilience and must be careful not to make unfortunate things a self-fulfilling prophesy.

“I don’t want to deny there are problems or that things are difficult but sometimes we have to not just analyse but act,” he said.

“Diplomats have had to find different ways of communicating. Obviously, I am here to represent the wellbeing of the United Kingdom and its property and interests, but I think we (Portugal and the UK) can grow together in terms of investment, technology, information and the economy.

The British Ambassador did not totally accept the idea that the British tend not to integrate in Portugal and highlighted several instances in the 18th and 19th centuries in the cork and port wine trades where British families had made a considerable contribution and continued to do so in Portugal in terms of wealth and jobs.

He rejected “protectionism” and “isolationism” out of hand in an increasingly global world and explained how it was futile to expect cooperation from China or India on climate change if we “closed our hands to them”.

“Europe is our space,” he said, stating that the UK was as much a part of Europe as ever and was not overly sideling up with the United States.

The Ambassador said that while the election of Barack Obama was hopeful, he warned that the “world would not change because of the efforts of just one man”. It was up to each and every individual and country to take responsibility and accept the challenges of the future.

Alex Ellis refused to be drawn into the Freeport issue other than to mention what the Portuguese Prime Minister José Sócrates had already said, about wishing for a ‘speedy and thorough investigation and conclusion’ of the process.