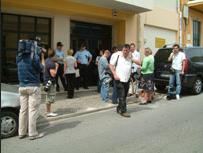 THE BRITISH couple, who became so drunk their children had to be taken into care failed to appear at court in Faro on Tuesday and have left Portugal.

Eamon and Antoinette McGukin were expected at the court in Faro at 3pm.  The Mourabel Hotel in Vilamoura confirmed that the family had checked out on Tuesday and a spokesman at the British Embassy in Lisbon confirmed to The Resident that the couple had left the country and had returned to the UK.

“Portimão Consulate provided assistance to Mr and Mrs McGukin but we are unable to disclose what that assistance was,” a spokesman said. The British Embassy and consulates are not involved in legal advice and could not divulge any information on the reason as to why the McGukins were summoned to court.

A spokesman from Faro family and minors court clarified that the McGukins had been asked to come to speak to Judge Beatriz Borges to “explain what had happened on Saturday, May 3”.

He said: “This is not a court that deals with criminal proceedings or accusations.”

The spokesman added that the case would be filed and no further action would be taken.  Under Portuguese law, Eamon and Antoinette McGukin, age 34 and 32, were under no obligation to be present at the hearing.

According to the spokesman at Faro court, the case will not be communicated to the UK authorities and therefore this is now the end of legal proceedings against the couple.

It had been thought that they could face possible charges of negligence and being drunk in charge of minors after their actions on Saturday.

The three children of the McGukins were housed at the children’s refuge Aboim Ascensão in Faro in the early hours of Saturday after  Portuguese social services placed the children into the care of the refuge while their parents had to be taken to a local health centre for treatment after drinking too much alcohol and being deemed unable to care for them.

According to press reports, the local GNR had been called by staff at the Mourabel Hotel in Vilamoura when the couple, from Londonderry, Northern Ireland, had returned to their hotel, heavily intoxicated after being out with the children for dinner.

The couple had to be taken to Loulé health centre and while they were being treated, their children were housed in the children’s refuge in Faro for their own safety.

A spokesperson at the Aboim Ascensão children’s home confirmed to The Resident that the three children were aged one, three and six and had been picked up by their parents between 11pm and midnight on Saturday but were unable to comment on any legal proceedings.

On Wednesday, Mr Eamon and Mrs Antoinette McGuckin issued a lengthy statement to Sky News. Here is the statement in full:

“Mr & Mrs McGuckin would like to take this opportunity to redress their situation as of yet they have not clarified the matter from their perspective.

On Friday, contrary to various reports, Mr & Mrs McGuckin did not consume excess alcohol when they went to the restaurant for their meal. They left their apartment at 7pm and went to the play park beside the restaurant where they stayed until 7.30pm. They then arrived at the restaurant where they ordered their meal and had their first alcoholic drink of the day. They moved onto the communal area where they played pool with other guests from the resort.  The amount of alcohol they consumed between the hours of 8pm and 10pm would not have been sufficient to render them incapable of being responsible parents.

They returned to the hotel before 10pm.  Antoinette became violently ill on arrival at the foyer of the hotel and required assistance from the Management. Eamon arranged with the Hotel Management to care for the children whilst he would accompany Antoinette to the hospital. Hotel Management agreed to this until the parents returned. The parents left with the paramedics in the belief that once Antoinette’s condition was established and treated they would return to the hotel to their children.

The official report from Loule Health Centre confirms that Eamon was conscious, orientated and helpful with staff whilst his wfe was unconscious. The British Consulate had requested a full report from the Health Centre upon the instructions of the couple. This full report informed that there had been tests carried out for blood pressure, pulse and blood sugar count.  Upon Antoinette gaining consciousness at 4.45am, Eamon contacted Health Centre reception in order to arrange transport back to the hotel as they were very anxious to be re-united with their children as soon as possible. Health Centre Medical staff removed drips from Antoinette before discharge.

On return to the apartment block at 5am they could not ascertain the whereabouts of the children until 6am. A member of staff informed them that their children were safe in a home in Faro, but no action could be taken until 8am when the Hotel Manager would be available.  The parents both went to the Hotel Manager at 7.45am who informed them that as a result of Paramedics being called the Police also had been called.  The Police informed Hotel Management that the children would have to be taken into Protective Custody. The Hotel Manager informed the couple that they needed to contact the Police to gain access to their children. Upon this news the couple immediately booked a taxi to the local Police station arriving at 8.30am. They were waiting there until 9.30am until they met the Commander who informed them that the address of the children’s whereabouts in Faro and that he would have it arranged that a fax from the appropriate authorities would be received by the Home by 11.30am for the immediate release of the children.

Both parents immediately proceeded to the Refugio Aboim Ascensao arriving at 10.30am. At reception, they were informed that they could not see their children or have any access to them until 4.30pm. The parents distressed by this news demanded to see their three children with staff detailing that there was nothing that could change. They repeated the information gave to them from the Commander at the Police. The staff were unaware of this news who again stipulated that 4.30pm would be the time when the children could be seen. Both parents told staff that they would be back at 11.30am to collect their children.

On arrival back to the Refugio Aboim Ascensao they were left waiting for a period of twenty minutes before Dr Luis Villas-Boas, Director of Refugio Aboim Ascensao, met with them. This was the first and only meeting that the couple had with this gentleman. The couple were brought into his office and advised that the children were in good condition. He stated that the press had been in contact with him and asked if they had any contact with the media also. The parents informed the doctor that their main concern was the children and not what stories the press were printing.

There had been no previous meeting with this gentleman. The parents collected their children and returned to their apartments.

At the swimming pool that Saturday afternoon whilst playing with the children, the couple were approached by two members of the GNR Police Force who requested a mobile number for any future contact. The couple had no mobiles with them on holidays and it was agreed that any information needed could be transferred via hotel reception. The Police stated that from their perspective the matter was closed and advised that they were free to travel with the children and leave the country if they so wished.

The couple spent the day poolside, playing with the children believing that this was the conclusion of events. On Sunday the couple decided to take their children to the beach via the direct transport from the hotel. On return from the beach at approximately 4pm on the Sunday the family were met by the Hotel Manager stating that a press presence had established themselves in the area because of the events of Friday and also parallels being drawn with the anniversary date of the McCann’s story.  The family hurriedly left reception to return to their room to protect their children from the media. The next time they were to leave would be in the early hours of Tuesday morning to return home.

Contact was made with the police on Monday late afternoon to ensure that there was no further need for the family to stay within the country. The police confirmed this and upon this news the couple initiated plans to get their family home. Flights were booked for the Tuesday.  At 7.30pm, two GNR Police Officers contacted the couple at their room notifying them to attend Faro Court at 3pm the following day. It was clearly stated that it was not obligatory to attend although they were strongly recommending a presence whether it was one or other of the parents. The couple contacted a Portugese Lawyer and a Portugese Judge via a third party, to confirm the best course of action and were told to take the already booked flight home as this was not in any way going to break any Portugese Law. The parents informed the Court in Faro that they would not be attending.

Notes from the Parents

We, Eamon and Antoinette McGuckin are deeply saddened and hurt by the events of the past days. We live and breathe for our children and would never ever place them in any kind of danger.

We hope that this traumatic experience is now closed as we want to get back to our normal routine of loving our beautiful children and getting on with life.

We will not be participating in interviews and would therefore appreciate that we are left in peace with no further media coverage.”