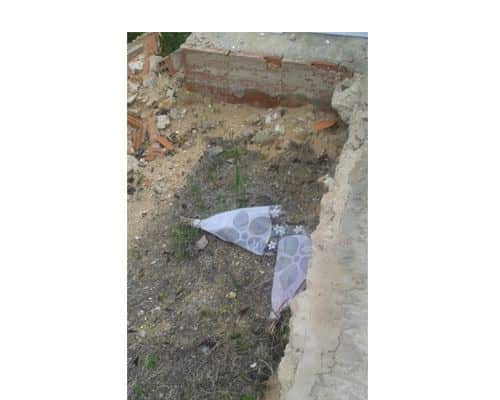 Nigel Jackson, the British resident found guilty of murdering his elderly partner and burying her battered body under cement in the couple’s back garden, has told the woman he moved into his life to move on with hers now that he has been condemned to 25 years in a Portuguese jail.

The “worst thing” about the sentence – delivered by Portimão judges last Thursday – was that he is “losing her love”, Vanessa Milheiro has told the UK’s Daily Mirror, adding that she never once had any idea that Jackson even had a partner.

In a report that leaves a number of question marks, Milheiro told the Mirror: “I never saw Brenda (Davidson). I didn’t know about her. I never saw him with her. He told me he was a single person. That was the Nigel I knew.”

Yet a few lines further on in the story, the mother-of-one says Jackson told her that “Brenda was here for medical treatment and that her son had come to take her to Spain, and that she went with him.

“He never told me that she was dead. He didn’t say anything about it. I only knew when the police contacted me.”

Milheiro “visited Jackson in custody every week” following his arrest last year, wrote the Mirror, “still believing he was innocent”.

She had even “made plans to start a new life with him on his release”.

But Jackson’s protestations of innocence cut no ice with judges, who condemned him on all charges: murder, the desecration of a body, larceny, IT and telecommunications fraud and two counts of misuse of a credit card.

According to the Mirror, Jackson “funded his new life” with Milheiro by selling his dead partner’s jewellery, using her bank cards and using Tippex to remove her name from the deeds of their home.

Milheiro was not aware of any of this, and told the paper she feels now that she “can’t trust anyone”.

But for Brenda Davidson’s four children, the sentence has finally brought closure on months of agony and uncertainty.

Jackson’s claims that he was innocent of everything but burying his partner’s body the way the couple had apparently promised each other they would do, had been sent to multiple sources – including the Resident – while he languished in jail on remand.

But as Brenda’s youngest son Dean told us months ago, he was an abusive partner, and Brenda lived much of her life in fear. “I tried to get her to come away with me,” Dean told us. “But she didn’t want to leave her animals. She loved them too much.”

Brenda Davidson’s severely decomposed body was found wrapped in tarpaulin in a shallow grave in January last year after Dean had become increasingly suspicious of Jackson’s explanations for his mother’s “absence”.

The horror threw the sleepy hamlet of Alcalar, set in countryside near Portimão, briefly into the international spotlight as residents there talked of their complete disbelief that Jackson and his partner had been anything other than a “perfectly normal couple”.