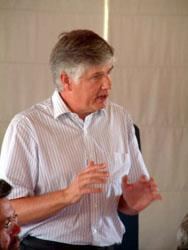 BRITISH AMBASSADOR to Portugal, John Buck, was the guest speaker at a British-Portuguese Chamber of Commerce lunch-debate held at the Sheraton Algarve and attended by around 40 members and guests.

He explained that the British-Portuguese Chamber of Commerce enjoys a close relationship with the British Embassy in Lisbon and that it works hard to facilitate two way trade between Britain and Portugal.

He also emphasised the work it does to assist investors and British companies setting up in Portugal and highlighted the fact that the Chamber is also always available to help companies through troubled periods, by putting the management in touch with the right people in moments of difficulty.

John Buck then took the opportunity to talk about British Foreign Policy.

He told the packed room that he felt there had been two world events that had conditioned foreign policy: the collapse of the Soviet Union and 9/11.

“We live in a time where events on the other side of the world affect us much more than they would have done 20 years ago. For example, the problems in Africa: we are all involved.”

He also conceded that there is no longer a clear distinction between domestic and foreign policy.

“What we have now is a global agenda of shared providence,” he said.

Mr Buck went on to outline the principles: “We want to live in a world with effective international institutions,” he said. This is a world with key partnerships and emerging powers. “We want to open up trade according to rules, we want to attract people to work, but we need to control migration. No longer is there a distinction between values and interest. Also, poverty in other countries affects our security because it turns people against us.”

He outlined the UK Government’s priorities for its strategy overseas:

• The struggle against terrorism – a key issue that will remain current for some years.

• Fighting international crime – globalisation and the opening of borders brings both threats and opportunities.

• Investment in measures to underpin sustainable development elsewhere and commitment to overseas aid.

• EU agenda continues to be an issue.

• Supporting British businesses – ensuring they have the framework nationally and internationally to enable them to take opportunities around the world.

• To offer first class consular services at the British Embassies and Consulates.

Mr Buck explained that the British Embassy in Lisbon has close ties with the Portuguese Government with regards to fighting international crime, fiscal fraud, immigration issues and narcotics. He said that the Embassy works hard to bring British and Portuguese companies together and that one such pairing in the environmental technology field has proved to be very successful.

The first commercial wave energy project in the world is being launched in Portugal, thanks to a partnership between Enersis and Scottish firm Ocean Power Delivery Ltd (OPD). OPD is the developer of Pelamis, the world’s leading technology for generating renewable electricity from ocean waves.

OPD has signed an order with a Portuguese consortium led by Enersis to deliver the initial phase of the world’s first commercial wave-farm worth around 15 million euros.

The first three machines are being installed on a site in Peniche (on the coast above Lisbon) and the initial phase of the farm will be capable of supplying electricity for 6,000 homes. Later, the wave-farm will be transferred to the Póvoa de Varzim area, near Porto.

The Embassy is clearly proud at having been instrumental in bringing these companies together.

How will the Lisbon Embassy develop itself?

“Embassies are increasingly becoming outposts of the British Government, just like Customs and Organised Crime Agencies. We need to become more focused. There are strong constraints on expenditure; we need to offer more value for money for the British tax payer.”

After his speech, the Ambassador took questions from the floor. First he was asked about what the British Embassy is doing to help control the drugs situation in Portugal, a country whose ports seem to be used more and more on the world drugs transport network.

“I think we all woke up to this problem about 15 years ago, maybe more,” he said. We have drugs liaisons officers at embassies around Europe and operational officers. Last year, 18 tons of cocaine was seized and this year the amount increased to 29 tons. “We cannot be certain if this means we are being more successful or if there is just a greater prevalence of drugs and smuggling activities in this country.”

Mr Buck was also faced with a question concerning immigration. In Australia, immigrants are expected to accept Australian values and customs if they wish to live in the country. Should the same happen in the UK?

He said that this issue relates more to domestic policy rather than foreign policy and that he was not really in a position to comment on the Government’s specific policies in detail. However he did say that more integration measures needed to be put into place to ensure a cohesive society. “It is all a question of balance when it comes to managing immigration,” he said.

He spoke about a points system based on what immigrants can bring to the UK, but that the Government was in favour of the UK remaining a refuge for genuine asylum applicants.

“It is a huge problem that will require a lot of co-operation to get right,” he said.

For further information about the British-Portuguese Chamber of Commerce, becoming a member and attending events, call 213 942 080 or visit www.bpcc.pt