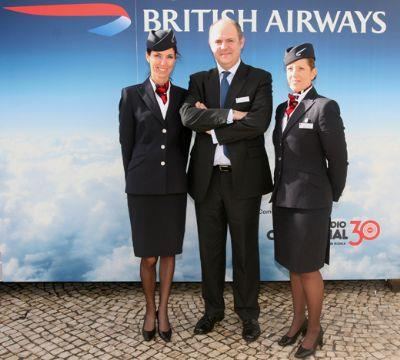 Last year was difficult for British Airways, a fact which director general for Portugal, Spain and Gibraltar, Jordi Porcel, doesn’t try to hide.

“With last year’s economic downturn, we had a job to break even and this year could prove just as challenging despite lower fuel costs,” said the Spaniard who runs BA’s Iberian operations from Madrid.

In a bid to remain competitive and get an edge over its competitors, it has launched a number of initiatives highlighting specific destinations that the airline flies to.

This included a portable building, which was opened to the public until last Sunday at Lisbon’s Parque das Nações, aimed at promoting London as the destination ‘par excellence’ for the Portuguese to visit as well as other destinations in the world.

With a falling Pound against the Euro, this is probably the best time for the Portuguese to visit the British capital. “We cannot take things out of context and the reality is one of falling passenger numbers, rising prices and a general economic gloom, but this initiative was conceived in response to information we have been getting from our customers on products, services and pricing,” said Jordi Porcel.

“We have come up with a completely different approach and philosophy whereby what we want to inform our customers is that this is not just about taking them from A to B; we understand that our customers are also tourists and, over the years, we have learnt a lot about different destinations and, therefore, can enhance the overall experience of our customers,” he added.