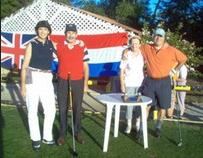 After a four year interval, five British and Dutch golf pairings teed off in Estoril to battle it out for the Chatham Trophy, based on the naval battle of Chatham in 1667 between the two nations.

First competed for between the two nations in 1988, the Chatham Trophy competition was the brain child of Peter van Haaps. The result of the first ever match was a tie. Since then, British pairings have won the trophy nine times, Dutch couples four.

However, the battle of Chatham, in September 1667, did not go as well for the British.

This year, the British team, captained by Ron Goddard, wreaked their own havoc on the Dutch, by beating them 4/1. The only Dutch victors were Abby Itzig Heine and Peter Dekker, who beat their British rivals, Ewan Rankin and Sally Buxton four and three. The Chatham Trophy was awarded to Ron by Dutch captain, Henk Vaandrager.