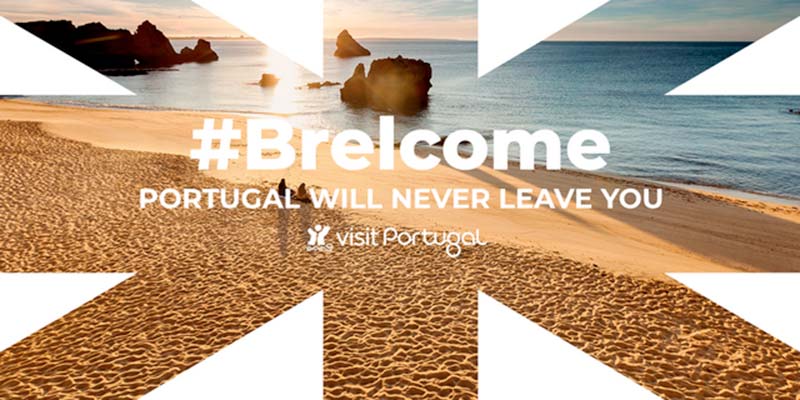 As Brexiteers in UK mounted a two-week “Leave Means Leave” march setting out from the north of the country en-route for London – and the future of Brexit remains as clear as the darkest form of mud – tourism bosses in Portugal unveiled a €200,000 campaign to reaffirm this European country’s ongoing commitment to its ‘oldest ally’.

“Brelcome, Portugal will never leave you” is the slogan adopted to carry a message already delivered by government leaders (click here).

Active until June, the campaign involves a “dedicated online information service, and a specific information area on VisitPortugal”, the official government site set up for foreign tourists interested in coming here.

Explain reports, the message essentially is that “some things never change”.

Portugal and the United Kingdom have been bonded in friendship since the Middle Ages and no 21st century shenanigans – not even this marathon of uncertainty – will be allowed to put a spanner in the works.

Putting the way ahead into simple words, economy minister Pedro Siza Vieira told reporters ahead of the Brelcome announcement: “We’re going to welcome tourists without the necessity for visas; we’re going to keep corridors open at Brexit so they can enter without interruptions; we’re going to maintain passport access to electronic channels for tourists coming only to Portugal; we’re going to continue giving access to the SNS health service and to the transport of pets.

“Everything will be created so that tourists from the United Kingdom do not feel – in spite of Brexit – that there is any alteration to the experience they have in Portugal”.

Unveiling Brelcome on Friday, secretary of State for Tourism Ana Mendes Godinho said the government’s commitment also runs to the “recognition of driving licences” – a doubt that has seen Brits living in Portugal but driving on UK licenses in desperate queues to change them at IMT offices in Faro and Beja for many weeks.

Mendes Godinho affirms that Portugal’s measures have all been “very well received by tourism operators and the British people themselves, who are our principal touristic market” – a market that was actually seen to grow in January by 4.3%.

In other words – reinforcing the government’s “KEEP CALM” campaign rolled out in January – ‘do not panic, everything (at least when it comes to Portugal) is under control’.

“In spite all the uncertainties, we want to make it clear that Portugal is an inclusive country that welcomes everybody”, concluded president of Turismo de Portugal Luís Araújo.