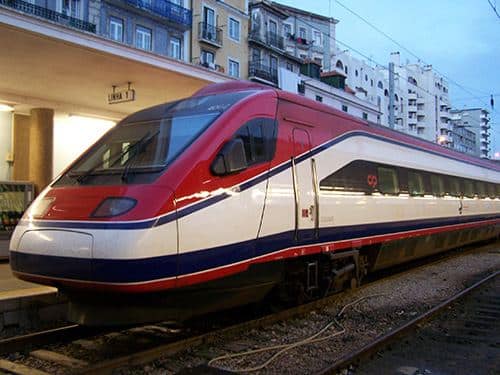 A delighted and very pretty Brazilian actress appears to have taken charge of one of Portugal’s high-speed Alfa Pendular trains on a journey to Porto.
The beautifully-manicured accomplished belly-dancer was recorded by a mobile phone as she drove the train at speeds of 220 km/ hour, blowing kisses and frequently exclaiming: “Wow! I am driving an ALFA!”
At one point, she is shown sounding the train’s horn and bursting into infectious laughter.
Taking time to adjust her hair, posing and curling her nose up in delight for the camera, Halima Abboud exclaims: “Look at this!”
And train authority CP is now looking at it very carefully.
The hugely-embarrassing 53-second clip will have train passengers all over Portugal wondering whether they should check the driver’s compartment before setting off on a long-distance journey – even if it is only to oggle at the pretty driver.
CP meantime has been swift to assure it is doing everything it can to “confirm the veracity” of the images, identify the train, date and time – and of course, try and find out how the sultry Ms Abboud came to be in the driver’s seat at all.
She has certainly never been a CP employee, says CP. CP drivers are discouraged from whooping with delight and creasing up in laughter over the controls – and few if any of them appear on Youtube in sexy gyrations.
According to Jornal i ,one of Ms Abboud’s most recent Portuguese roles was that of a stripper in the film “Call Girl” by António Pedro Vasconcelos.