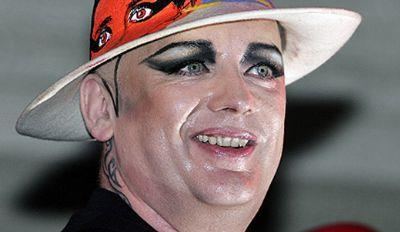 Former Culture Club front man, Boy George, is currently working in a prison canteen after being sentenced to 15 months at London’s Pentonville Prison for falsely imprisoning a male escort.

The 47 year old, whose real name is George O’Dowd, was convicted of an attack that took place in 2007 which was described as ‘humiliating’ to the court and deemed ‘callous’ by Judge David Radford.

The singer, famed for his flamboyant hats and make up, is said to be terrified of being attacked in jail because of his sexuality.

Prison sources have told the press that Boy George has been very quiet but he has not been crying and seems to spend a lot of time asleep in his cell.