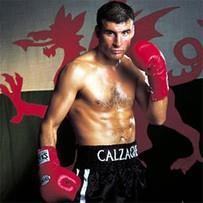 TWENTY THOUSAND people crowding into Manchester’s MEN Arena at 2am on a bitterly cold Saturday night bore testimony to the fact that Joe Calzaghe’s eagerly awaited title unification showdown with Jeff Lacy was one of the most important contests staged in Britain for many years.

Calzaghe, big, skilled and handsome, has remained undefeated in a career that dates back to 1993, scoring 40 wins in the process. The 33-year-old Welshman has held the WBO super-middleweight title for seven years, defended it 17 times, and has beaten six former world champions. Yet universal recognition has eluded him, despite being rated one of the top half-a-dozen fighters in the world by the legendary Marvin Hagler. All this has now changed.

In 29-year-old Floridian Lacy, boasting 17 knock-outs from an unblemished 21 fight record, Calzaghe faced an opponent rated only behind Mike Tyson and Evander Holyfield in the stateside popularity stakes, the star of the US Showtime boxing television network. The American’s IBF belt, and more importantly, sky high reputation was on offer, and Calzaghe seized his opportunity with relish. He took the fight to his opponent, comprehensively outboxing the younger man throughout. The subsequent unanimous points decision was clear cut, even more so in the light of the last-round knock-down, the first time that Lacy had been floored in his promising career to date. Calzaghe has finally burst onto the world stage, which should have been his by right a long time ago.